When I saw the opening credits of Christmas Angel my heart sank. It's a film directed by Brian Herzlinger. If you're unfamiliar with that name then you were lucky enough to avoid the My Date With Drew drama on IMDb a number of years ago, in which Herzlinger spectacularly failed to realise the difference between enjoyable, friendly self-promotion on a chat forum and having to use hyperbole, lies and petty insults to stand your ground on a movie that few people had heard of at the time, let alone formed any opinion on. My Date With Drew was bad, but it wasn't THAT bad. If he'd gone about things in a different way then he may have received some grudging compliments. But he didn't. I only hope, for all concerned, that he's learned his lessons and moved on. Because nobody needs to sail through THAT shitstorm twice in one lifetime.

So let's get to this film. And let me say right now that I quite enjoyed it. I didn't love it - it's one of the many Christmassy TV movies that always reminds viewers that it's a Christmassy TV movie - but it was harmless enough, and featured a few good lead performances helping things along. Heck, the story was almost just the right level of sweetness to make you care without making you vomit. Almost.

The plot concerns a young girl (Olivia, played by Izabela Vidovic) who decides to investigate further when a number of wishes, made by her fellow classmates, are fulfilled. Olivia wants a husband for her mother (played by Teri Polo), a situation that looks a bit more likely when Nathan Davis (Kevin Sorbo) comes into their life. But Nathan isn't the man that Olivia wanted for her mother. Can she make her own wish come true? Perhaps the old woman (Della Reese) living nearby can help.

The script here is perfectly acceptable for a Christmas confection, and the performances from all involved are pretty good. Vidovic often veers over from cute territory to smug, but I guess most people won't be as bothered as I was by that balancing act. Polo and Sorbo do well, with the former especially likable and the latter doing a good "is he or isn't he a grinch?" routine. Reese is a lot of fun as the woman who may be holding one or two secrets, and Tamera Mowry-Hously and Jaiden Kaine help to liven things up, playing friends of the character played by Polo, a couple not averse to some minor meddling if it sees their friend happy.

There's nothing here that's great, but it could be good, if not for one main aspect. Yes, you may have guessed it, the direction. A lot of it is competent enough (I mean, this isn't exactly Gravity that we're watching), but then there are moments when the camerawork/framing is so clumsy that it takes you out of the movie, and you need to stay immersed in a light piece of work like this. Despite what he may think if he ever reads this, and I know Herzlinger certainly used to keep a close eye on reviews of his work, this is not me looking for an excuse to bash him. I'm not saying that his work on the film is inept, but there are certainly times when it's lacking, even for a TV movie.

All in all, Christmas Angel evens out to be a pretty average, ultimately quite enjoyable, story to watch during the Yuletide season. 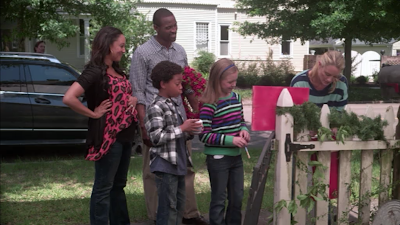