Steve Guttenberg stars as the son of Santa in this movie, all about his quest to find love before he settles into the role that he's destined for. He is given a list of potential names to try and find a connection with, but doesn't find himself warming to any of them. Instead, he ends up enjoying the company of a woman (Beth, played by Crystal Bernard) who works in the advertising industry. The two, initially, seem to have different sets of values, but viewers won't be surprised to see how things eventually turn out.

I realise that some people may have made up their minds about this movie based on the first three words of this review, but it's worth remembering that a) Steve Guttenberg headlined some great movies and b) expectations should always be kept low when about to view any festive TV movies. So let's move past that and look at what else the film has to offer.

Single Santa Seeks Mrs. Claus is the usual mix of sweetness, simple lessons about the values that people should hold dear, and a sprinkling of magic. Guttenberg and Bernard are both fine in the lead roles, working nicely together and doing their best to help distract viewers from the slightly hasty and clumsy plotline unfolding. Dominic Scott Kay plays the son of Bernard's character, and does well, and Armin Shimerman is a lot of fun as Ernest, the assistant to the Claus family, doing his best to ensure that Claus Jr. is ready to step into the boots of Claus Sr.

The script, by Pamela Wallace, is standard TV movie stuff. It's inoffensive and light on laughs, but it wanders along from A to B in a perfectly serviceable manner. Harvey Frost directs with competence, and a quick glance at his filmography shows that he's also directed at least four other Christmas movies, so the guy seems to have found his niche.

This isn't a film that you'll look forward to seeing in the viewing schedules, but it's a perfectly acceptable bit of fun at Christmas. It may be distinctly average, but even that can be a pleasant surprise in the minefield of Christmas TV movies. 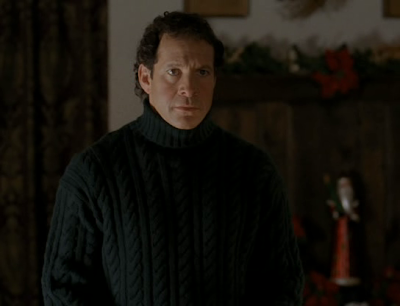