Christmas movies are pretty easy to make, as are family movies. Well, that's what ABC and other channels, churning out numerous TV movies every year, would have you believe. And, in a way, they're right. Both require some kind of sweetness, a moral lesson to be learned (usually), and an environment for the main characters that is distinctly . . . . . . . . . . . movieland. The former also requires snow.

But making a GOOD Christmas and/or family movie, that's something different altogether.

Saving Santa is almost good, but it doesn't quite do enough to warrant any repeat viewings. It's the story of an elf named Bernard (voiced by Martin Freeman). Bernard likes to invent things, and always rushes to present his latest inventions to his peers, in the hopes of becoming more than just the elf responsible for clearing up the reindeer droppings. Unfortunately, there always seems to be some malfunction. This time around, the malfunction temporarily disables the cloaking of the North Pole base. It's not visible for long, but it's long enough for Neville Baddington (Tim Curry) to see it and make his move. He wants to get Santa and find out his secrets. He wants to know how he can make all of his deliveries in one night, so that he can use the same tactic to make his delivery company the fastest ever. The answer, as Santa shows Bernard during the calm before the storm, is time travel. Knowing the secret, Bernard decides to go back in time to stop everything going wrong. And that's when things start to get a bit complicated.

Although it's animated nicely enough, and the second half improves things greatly after a mediocre opening, there's just nothing here to make Saving Santa stand out. Freeman is fine in the lead vocal role, and Curry is great as the villain, but the support from Joan Collins, Ashley Tisdale and Tim Conway is as bland as the rest of the movie. Noel Clarke is fun, as the leader of a defence squad, but he's not in the movie for all that long, sadly.

The direction by Leon Joosen and Aaron Seelman is serviceable, I suppose, with the script by Ricky Roxburgh (based on a story by Tony Nottage) never rising too far above average. The time travel stuff starts to get more and more entertaining, and it's quite cleverly done, but the dialogue disappoints and none of the supporting characters, with the exception of reindeer Blitzen, make much of an impression.

And let's not mention the truly awful songs that punctuate proceedings every now and again. It's enough to make you want to stuff plum pudding in your ears. There are much worse movies to watch if you have undemanding children wanting to watch something new, but it's certainly worth trying to convince them that they should just rewatch the delightful Arthur Christmas instead. 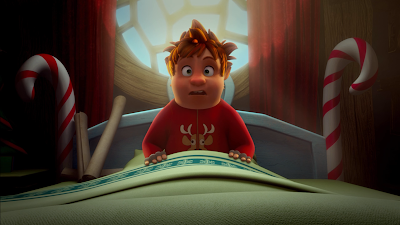