Let me get the plot out of the way quickly before you start laughing too hard. A family hear a knock at the door and find a gift left there. Nobody is around, just the box. Inside the box is a snowglobe. It's not just any snowglobe, however, this is a magical snowglobe. Whenever it is allowed to run it causes a disaster in the surrounding area. Of course, this isn't a conclusion that the characters immediately reach, but it's not long until the strange truth becomes apparent to young Rudy (Dylan Matzke). It then becomes a race against time to figure out how to stop the snowglobe from causing further destruction.

Laura Harris and David Cubitt are the parents who end up battling some extreme weather while trying to protect their loved ones and find a way to safely resolve things, Matzke is their young son, and Magda Apanowicz plays their daughter. Jeffrey Ballard plays a snowboarder who is also caught up in the midst of this bad situation. While nobody onscreen is great, it has to be said that they all do a pretty good job, especially considering how preposterous the central premise is (although Christmas is a time for magic, be it light or dark).

The script by Rudy Thauberger is in line with other low-budget disaster movies, which means that it's pretty weak. But, like the acting, it's a bit better than other work within the same range. Director Sheldon Wilson keeps things moving along nicely enough, and uses the varied CGI in a way that lets him visualise every idea in the script without highlighting all of its flaws for too long. That may not sound like much, and there's still enough on show to point and laugh at, but there's enough restraint shown, and just enough small character moments, to keep the film consistently watchable.

I'm sure that, as is often the case, many people will roll their eyes and just laugh at my opinion here. I liked Snowmageddon. I almost liked it a lot. Believe me, I'm just as surprised as you are by that statement. But I'll stand by it. 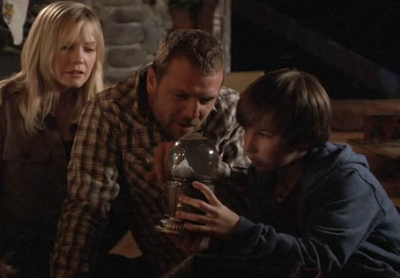