It took three people to write A Cadaver Christmas and you should know what to expect when you see that two of those three co-writers also bag two lead roles, with the third scribe also taking on the directing duties. Yes, A Cadaver Christmas may not be the worst independent, zombie-related, horror-comedy set at Christmas time, but it has too many flaws to make it a truly enjoyable experience.

Daniel Rairdin-Hale is a man who walks into a bar covered in blood, and he has a story to tell that nobody will believe. It involves a crowd of walking undead and creative use of the tools that he uses in his janitorial position. While nobody quite believes what they're hearing, they all end up sticking together until they get to the bottom of whatever is going on. The motley crew includes the bartender (Hanlon-Smith Dorsey) and one of his loyal customers (Ben Hopkins), a police officer (Yosh Hayashi) and his twisted perp (Andrew Ryan) - with all of them about to have a memorable Christmas.

Mixing elements of Braindead and Feast, with a few other splatterific titles referenced along the way, A Cadaver Christmas tries hard for most of its runtime, but it becomes clear after the first few scenes that this is a slight film built around a few set-pieces that aren't as memorable as they were in the minds of the men writing the script (Rairdin-Hale, Dorsey and director Joe Zerull).

The performances are all almost okay. I wouldn't say that anyone is terrible, but that's only because I am a kind soul who doesn't like to lay in to people who seemed to be trying their best. Let's just say that none of the main cast members are at ease in front of the camera, with each performance containing at least a hint of awkwardness.

But we horror fans can forgive any level of acting onscreen if the gore and pacing keep us happy, right? Well, there are one or two good gore gags, but this film falls into the trap that has claimed so many others. Sequences that should run for a minute or two are, instead, stretched beyond breaking point, and so much of the material feels like filler that it starts to become boring.

It's not unwatchable, not by any means, but I'm still waiting to see that truly great Christmas zombie movie. Hell, at this point I will settle for a good one. A Cadaver Christmas is just average, at best. 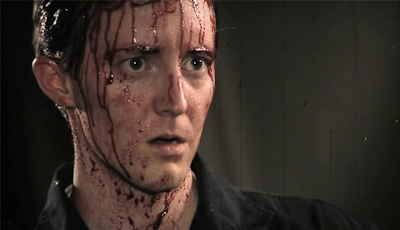