Laura Vandervoot plays Jennifer, a young and ambitious career woman who is put in charge of the Christmas promotion in the shopping mall that she works for. This year differs from other years, the need for sales is more important, and Jennifer needs to come up with a GREAT idea to get those tills a-ringing. She decides to create a competition to find a sexy Santa, which puts her in close proximity to David Morretti (Nick Zano). David has his own reasons for entering the competition. He'll do what he has to do, but he'll keep a chip on his shoulder while doing it. Jennifer doesn't like David, but all of the women seem to love him. And as the movie unfolds, Jennifer starts to warm to the man that she initially disliked so much.

This would be standard rom-com stuff and standard Christmas movie fare if it wasn't quite so bland and flat and unengaging. Writer Michael J. Murray doesn't take any care with the characters or plot developments, and director Craig Pryce takes the same approach with the direction. There's nothing here that you can't predict within the first few scenes, but there's an extra degree of laziness to it all. Characters change and transform just in time for the finale with very little genuine motivation.

Vandervoot is okay in her role, despite the fact that she's given very little to work with. Her character is the standard Christmas meanie who changes as the film unfolds, although in a slightly different way from other Christmas meanies (what with her actually enjoying Christmas). She's easy enough to like, which makes it more jarring during the "boo, hiss" moments in the first half of the movie. Zano is also okay in his role, he's handsome enough and too-good-to-be-true in a way that will make many a woman swoon for him. There are some decent supporting turns, with Natalie Krill being good fun as the lovestruck Brittany, but this is all about the two leads, with others just popping up occasionally to cause friction and/or drive the plot forward.

I don't know why I dislike this more than recent Christmas movies I have watched, but it just felt like everyone involved . . . . . . . . . . . wasn't trying very hard. That kind of laziness just covers any film like an old, unwashed cloak made of itchy wool.

Another one not available on DVD at the moment, so have a look at this selection - http://www.amazon.com/Holiday-Romance-Collection-Movie-Pack/dp/B00DNLZRLU/ref=sr_1_2?ie=UTF8&qid=1386624754&sr=8-2&keywords=desperately+seeking+santa 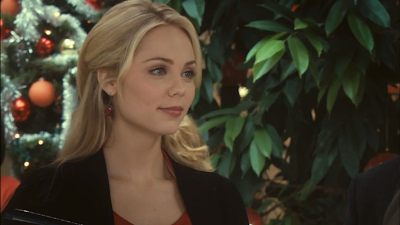