I liked A Christmas Story when I FINALLY saw it. I liked it quite a bit. But I didn't love it. I hadn't grown up with it playing on a loop every day in December. It just wasn't quite as revered here in the UK, where we don't often have the wished-for white Christmas, and rarely view the season with such naivete and optimism. Whatever your views on the movie, however, there's one thing that we can all probably agree on. It didn't need a sequel. But now, 29 years later, it has one.

Braeden Lemasters plays Ralph Parker this time around, the young boy now an older, but not necessarily wiser, teenager. His father (played by Daniel Stern) still loves to save money wherever he can, and everything feels a bit different but also very much the same. Oh, and it's coming up to Christmas. This is standard sequel stuff.

Directed by Brian Levant, this actually doesn't stink as badly as it should, mainly due to the anecdotal nature of the material being a lot of fun, even if it isn't always as easy to identify with as the material used in the first movie (a clue that they'd already used the best stuff, so had no need to revisit the characters). Yes, it's completely unnecessary, but so are many sequels. The fact that Nat Mauldin, who wrote the script once again based on aspects of Jean Shepherd's book "In God We Trust, All Others Pay Cash", keeps everything enjoyable is mainly due to the fact that it skips from one incident to the next before you can have time to get bored and/or angry at anything repeated from the first movie.

Stern is okay as the father, but he's not as good as Darren McGavin. He plays his character slightly over the top, providing a much simpler performance because he's easier to like, even while he's being the stern dad (no pun intended). Lemasters is also okay as Ralph, I guess, but he's a character defined by the hair and glasses more than anything else. Those remain in place, so that's half the battle won from the very beginning. Elsewhere, David W. Thompson and David Buehrle are good fun as Ralph's friends, Tiera Skovbye is the coveted Drucilla and Gerard Plunkett plays a car salesman who ends up being owed quite a bit of money from our young, central character.

There's a believability missing from this that the first movie had, but a Christmas movie that doesn't feel quite believable is hardly a rare thing nowadays. It doesn't matter as long as it's enjoyable, and there are times when A Christmas Story 2 is enjoyable. Is it anywhere close to being as good as the original movie? No. But it's an amusing enough diversion, which is more than can be said for some movies that dress up their mediocrity in tinsel and fairy lights. 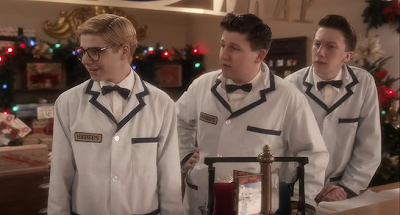