I was hoping to like Noel. Why? It was a Christmas movie with a good cast, and it was directed by the fantastic Chazz Palminteri. I like Christmas movies, in case anyone somehow hadn't noticed that yet, and I like Chazz Palminteri. I also like Susan Sarandon, Paul Walker, Penelope Cruz, Robin Williams and Alan Arkin, all of whom star in the movie. Sadly, the film just isn't that good. It does for Christmas what the likes of Valentine's Day and New Year's Eve did for their respective occasions. Which is to drain it of all magic and instead fill it up with cheap manipulation and saccharin sweetness.

What's the storyline? It's a selection of criss-crossing story strands. Susan Sarandon plays a lonely woman who devotes most of her attention to her hospitalised mother. She eventually meets a man (Robin Williams) who seems to know just where she is at in her life at that exact moment. She also meets a young woman (Penelope Cruz) who is being driven away from her boyfriend (a cop, played by Paul Walker), due to his explosive temper. Walker, while trying to win back the woman he loves, is approached by Alan Arkin, playing a man who seems to see the reincarnation of his ex-wife in the young man. Oh, and there's also a man (Marcus Thomas) who wants to spend the evening in hospital, because his happiest memory was when he was hospitalised, as a young boy, and got to enjoy the Christmas party thrown for the patients.

Written by David Hubbard, Noel features a handful of good performances that are wasted in a pile of schmaltz. Schmaltz is a hard thing to avoid in any Christmas movie, but this one is especially bad. The musical cues, the journeys of self-discovery, the warm, Christmassy glow suffusing every scene, it all works to remind you that you must feel the joy of the holiday season. You must sense the magic, despite all of it being very basic stuff executed with very little style.

Palminteri, who also gives himself a fleeting cameo, doesn't direct with any confidence. Thankfully, he gains a few bonus points by assembling a good cast, but that's about the only thing that the movie has going for it. Sarandon, Walker, Arkin and Cruz are all very good, Thomas is okay, although he just has to keep repeating the same idea over and over again, and Robin Williams does the quietly contemplative act he's been doing in his serious roles for years now (the regret, the wry grin, the soft and quiet manner).

It's a shame that I've ended up rating this even lower than many of the TV movies created at this time of year, but this one had the chance to be much better. It feels more like a wasted opportunity, which isn't the feeling I want from my Christmas movies as the end credits roll. 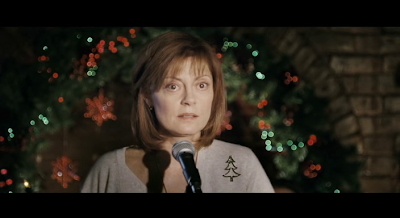