I guess it happens occasionally. Despite my optimism, I end up watching a lot of BAD TV movies every December. Some of them have good intentions, some of them don't (or, if they do, it's hard to figure them out). Crazy For Christmas is one of the rare good ones. I'll even admit to having a lump in my throat during the final few minutes, although that may be as much to do with me getting more emotional in my old age than any skilled film-making.

It's Christmas Eve and lone parent, and chauffeur, Shannon (Andrea Roth) is offered a driving job that may be inconvenient while she tries to prepare for the big day with her son (Jason Spevack), but it will pay well. She is asked to drive around Fred Nickells (Howard Hesseman), a rich, eccentric man who seems determined to give away lots and lots of money in attempt to spread some Christmas cheer. As the day unfolds, it soon becomes clear to Shannon that she wasn't just randomly picked for the job, but that doesn't help her to figure out just what Mr. Nickells is up to.

The script, by Michael A. Simpson and Rick Bitzelberger, many not seem up to much, but for a Christmas TV movie this is solid, enjoyable and intriguing, stuff. There are many moments that don't quite work, but that's usually more to do with the varied levels of the acting on display than the quality of the script. Believability is stretched to breaking point within the first 15-20 minutes, but this is a Christmas movie, so that's not surprising.

Roth is fine in the lead role, and Hesseman is also very good, with the both of them working well as they spark off one another. Daniel Fathers plays the one man who knows the most about Mr. Nickells, and remains very loyal to him, and Yannick Bisson is likable as Peter, a news reporter who gets wind of the story and is tasked with making it into a main headline.

Director Eleanor Lindo deserves some credit too, of course, as she takes the cast and the script and does just enough to keep this all a step or two above the usual level of quality seen in such Christmas fare. It's a film that I'd watch again, and I tentatively encourage people to check it out during the holidays. 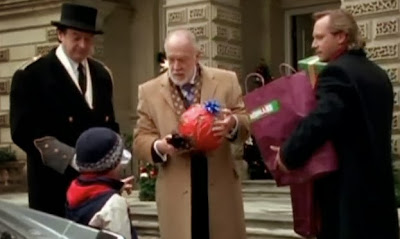