Based on a book by the prolific, and fantastic, Terry Pratchett, Hogfather is very much a Christmas movie in all but name. You see, it takes place in the fantasy universe created by Pratchett, on a main planet named Discworld, and during the holiday of Hogswatch (which is equivalent to our own Christmas, with gifts being delivered by a fat man who squeezes down chimneys - the Hogfather of the title). But strange things are afoot on this Hogswatch. There's a cunning assassin (Teatime, not pronounced how it is spelt, played by Marc Warren) who wants to stop children believing in the Hogfather, in order to set off a chain of events that he thinks may even stop the sun rising. Because belief is a powerful thing. Death (voiced by Ian Richardson), and his assistant (Albert, played by David Jason), does what he can to keep the belief alive, delivering gifts and essentially becoming the Hogfather for a night, but his actions alone may not be enough. Fortunately, he may receive some help from his half-human granddaughter, Susan (Michelle Dockery), and a bunch of wizards (led by Mustrum Ridcully, played by Joss Ackland). As the night plays out, some may die, while others may pop into existence for the very first time. Because belief IS a powerful thing.

Directed, and adapted from the source material, by Vadim Jean (who also then helmed The Colour Of Magic), Hogfather is perhaps a slice of festive entertainment enjoyed best by those not as familiar with the works of Pratchett. The introduction sets things up quickly and easily enough, before going on to develop the story in a way that allows viewers to play catch up. Of course, those familiar with Discworld will find more little details to enjoy, but I find that every adaptation of Pratchett's work suffers, simply by being unable to translate the many little gags and footnotes into anything cinematic. The same problem, unsurprisingly, to arise when film-makers try to mine the equally rich imagination of Douglas Adams.

Hogfather, with its more familiar holiday setting (as already mentioned, this is a Christmas movie in all but name) fares better than most. The mix of great characters and fun special effects (both practical and computer-generated, all suited to the tone of the material) helps, the script provides some laughs once it gets into the second half, and the cast are all pretty great in their mix of quirky roles. It's worth noting here that this was created as a two-part TV movie, and the second half is certainly more consistently entertaining than the first half.

Ian Richardson may provide the voice only, but he gets to portray one of the most beloved characters in the Discworld universe. As surprising as it may seem, Death is always good company, and this movie treats him as well as he deserves. David Jason, Michelle Dockery and Joss Ackland are all just fantastic in their roles, while Marc Warren is a lot of fun, but stuck with interpreting one of the stranger characters onscreen (in terms of mannerisms and speech). Support comes from a talented bunch, including Nigel Planer, Tony Robinson, Craig Conway, David Warner, Stephen Marcus, Sinead Matthews and many more, with nary one poorly delivered line between them.

Different from almost anything else you could choose to watch in December, Hogfather hits all of the required notes, but gives everything a fun twist. And it has Death in a "Santa suit", so what more do you need? 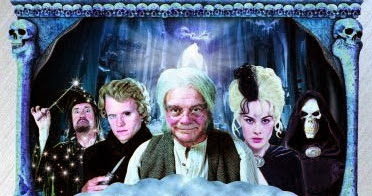