Breaking away from the elements that were used ever so loosely to connect the first three movies in this franchise, Silent Night, Deadly Night 4: Initiation takes place at Christmas, and that's all that is needed to install this as part of the franchise. Well, they do show a clip of the previous movie on a TV set at one point, but that's it.

A few people came together to create the bonkers story, but the script is credited to Woody Keith, so he's the man to ultimately blame for something so shambolic that also manages to remain so uninteresting.

Neith Hunter plays Kim, a woman who starts to investigate a mysterious death in her local area. It seems that some woman fell from a rooftop and spontaneously combusted. Clint Howard was in the vicinity, so horror fans will already know that this was, ummmmmm, no . . . . . . . ordinary . . . case of spontaneous combustion. Kim meets a friendly woman named Fima (Maud Adams) and soon ends up getting mixed up in something quite sinister. Fima and her friends want Kim, and their reasons for having her in their company aren't selfless ones.

Director Brian Yuzna, someone who creates schlock that I usually enjoy, hits a bit of a low point here. It's not the worst thing that I've seen him put his name to (the sequel, The Toymaker, is the worst), but it's close. There are some aspects to the movie that horror fans will enjoy, including one or two decent special effects from Screaming Mad George, and a cameo role for Reggie Bannister, but not enough to even class it as an average time-waster.

Hunter isn't terrible in the lead role, but she's far from the best, and she's not helped one bit by the lazy, messy script. Adams is a pleasure to watch, but she's just not used effectively for most of the film. And then there's Tommy Hinkley, playing a character named Hank who has a relationship with Kim, but spends most of his screentime simply doing whatever it takes to make the leading lady more resolved to investigate the mystery and take a number of risks. Howard does his oft-used crazy schtick, and does it well enough, I suppose, while Reggie Bannister is simply there, seemingly, to allow his name to appear in the credits as a bonus to horror fans.

You can, if you wish, watch all of the Silent Night, Deadly Night movies without feeling TOO much pain. But they're not really worth the effort. If determined to watch them all, however, then take solace in the fact that none of the other movies are as bad as that second film. This film may not be good, but it's still a step or two up from the nadir of the series. 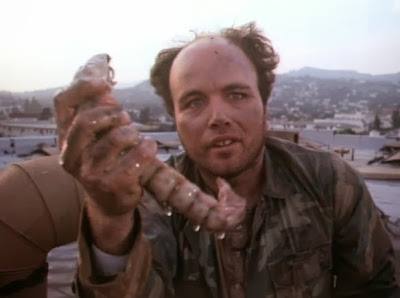