It isn't every grown man who would think that a film about Daphne Blake and Velma Dinkley, the female members of Mystery, Inc, could make for an easy bit of DVD entertainment. Well, I am not every grown man. Sometimes I am told that I am BARELY a grown man. Immature? Call me that again and I will blow a raspberry at you and stomp off to my room.

But enough about my maturity, or lack of it. What does this film actually do with the characters?

Well, after being friends online for such a long time online, Daphne (Sarah Jeffery) is finally going to meet Velma (Sarah Gilman) in real life. They will, in fact, be attending the same school. But something isn't right at the school. Students have been undergoing personality changes and, perhaps even stranger than that, Velma is a consistent F-grade student. Is there some scheme being masterminded by the man who helped turn the school into a tech-lovers paradise (Tobias Bloom, played by Brooks Forester)? Are aliens involved? Or is the real villain Two-Mop Maggie? (Mickie Pollock giving Scooby Doo fans an enjoyably archetypal "grouchy caretaker" persona)

Written by Kyle Mack and Caitlin Meares, Daphne & Velma may be a bit disappointing to people who want to catch lots of nods to Scooby-Doo adventures but, to be fair, it's not really being sold on that. It's exactly what it says it is. A Daphne and Velma movie. The characters may not be the same characters that you or I grew up with (assuming SOME of you reading this are the same age as me) but they're not changed beyond recognition, and the younger incarnations shown here should appeal more to the target demographic. In that regard, Mack and Meares do a good enough job. The film is a positive one, the simple comedy is amusing enough, and the mystery element is entertaining without anything that could overly worry younger viewers.

Director Suzi Yoonessi keeps everything moving along in the expected bright 'n' breezy manner, with the visual palette blending the cartoon origins of the characters with the hi-tech environment that they're exploring. It doesn't take Daphne and Velma long to find outfits that match the colours we're used to seeing them in (this isn't a long, tortuous, origin tale) and the fact that nobody here is trying to create some kind of extended "Scooby Universe" allows Yoonessi to focus on the real heart of the film, two girls who become firm friends and look out for one another as their investigative instincts take them through some dangerous territory.

Jeffery and Gilman are fine in the lead roles, Brian Stepanek is good fun as an overprotective father, Forester and Pollock do enough to remain suspicious in the third act, Vanessa Marano, Adam Faison, Evan Castelloe, and Courtney Dietz are fellow students, who may be in danger or may be causing danger for others, and Arden Myrin is a lot of fun as the head of the school.

I didn't enjoy Daphne & Velma as much as I hoped I would but that's because, as much as I'd like to fool myself into thinking otherwise, I'm a middle-aged man. This is a film created as a positive, fun, adventure for young girls. Viewed from that angle, it works. It's no classic, granted, but it works. 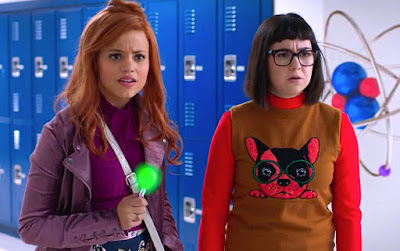