Glenn Ford is a cop named Dave Bannion who cannot stand aside and turn a blind eye to the corruption going on around him in this fantastic, thrilling, film noir, directed by Fritz Lang. Bannion is shown at his determined best when called upon to investigate the suicide of another officer. It's not long until he realises that the story doesn't add up, leading him to head over and question the local crime boss (Mike Lagana, played by Alexander Scourby). This gets him into quite a bit of trouble with his boss, only made worse when he accuses him of being in Lagana's pocket, which gets him kicked off the force. But that's not the end of his involvement in the case, far from it, and the events that follow see him finding an unexpected ally in the shape of an ill-treated "gangster's moll" (Gloria Grahame). Perhaps the two of them can do what the police seem unable to.

You have pretty much everything here that you could want from a film noir, even if they're not as strictly pigeonholed as purists might like. The femme fatale, for example, isn't necessarily who you expect it to be. Bannion is a flawed hero in the way he storms into situations, not for any skewed moral compass. And the downbeat tone is woven throughout a number of main scenes as opposed to being dealt out in a bleak and nihilistic finale.

The script, by Sydney Boehm, manages to stretch everything out to just the right length without overcomplicating what is essentially a simple premise. You get a decent cast of characters who are all given perfect introductions. Lang directs everything with his usual level of skill, nothing too flashy but masterfully handling the material with just the right touch to keep it all entertaining, even as it bobs and weaves around some very nasty moments.

Ford is as dependable as ever in the lead role, not the best actor ever but one of the best at delivering dogged determination and a resignation to take the right path, not the easiest one. Grahame is a lively presence, lifting the film slightly as soon as she first appears, and Scourby is fine, outshone in the villain stakes by a young and heartless Lee Marvin. Jeanette Nolan is also very good, the widow of the deceased who may well know more than she is letting on.

Both typical and atypical as a film noir, this should still work for all fans of classic cinema. Did Lang ever make a bad film? From what I have seen so far, I have to say no.

Here's the blu for you.
American shoppers can get it here. 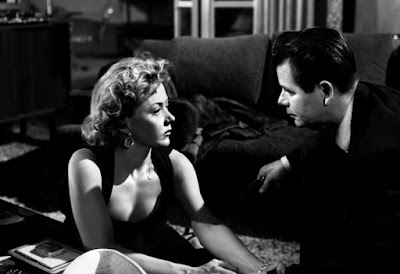