There are times when Reese Witherspoon stars in the type of movie that you don't mind sitting through for 90 minutes in between other, often better, movies. She can do "fluff". She has also starred in some genuinely great films, but most of her choices tend to be in the "fluff" section. Look through her filmography for the 21st century and you will see that every second or third movie she has done falls under this category. And I have enjoyed quite a few of them.

I didn't really enjoy Home Again though, which is a horrible rom-com that misses out both the rom and com elements, relying on the star power of Witherspoon to gain the goodwill of viewers.

Witherspoon stars as Alice, she's the daughter of a celebrated film director and the mother of two girls. She is separated from her husband (Michael Sheen) and gets through each day with the help of her own organisational skills and occasional help from her mother (Candice Bergen). After a big birthday night out, Alice wakes up alongside Harry (Pico Alexander). His friends, George (Jon Rudnitsky) and Teddy (Nat Wolff), slept on the sofas. They are all trying to get their first feature film made and, before you can say plot contrivance, all end up staying with Alice as they try to capitalise on a big break with a hotshot movie director (Reid Scott).

There have been worse rom-coms released than this one, a lot worse, but it's hard to think of one right now, especially one with such a relatively big name in the lead role. Witherspoon, Sheen, and Bergen all deserve better, although it's only Sheen who manages to fight his way above the material, and that is despite him playing the designated asshole of the main storyline. Pico Alexander, however, doesn't seem to deserve much better, simply because he doesn't exude the kind of appeal that is required for his role. Rudnitsky and Wolff are both much more enjoyable onscreen, and I wouldn't mind seeing them in some better roles, in some better movies.

Writer-director Haillie Meyers-Shyer shows that being the daughter of someone as comfortable with this kind of material as Nancy Meyers (her mother) does not automatically qualify her as someone talented in the field. From the script, which could have been put together by a malfunctioning computer program, to the casting of ineffective lead players, to the obvious lack of warmth throughout, even during the moments most obviously designed as heartwarming highlights.

I can give you at least 50 rom-coms that are funnier and/or more romantic than this one. At least five of those star Reese Witherspoon. So there's no reason to ever make this a priority viewing. 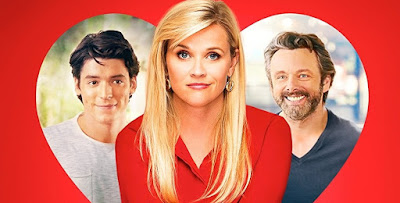