At the start of Tau we see Maika Monroe (playing the lead character, Julia) weaving her way through a crowd and getting up to some pickpocketing mischief. Then, just moments later, she is incapacitated, her character moved to the house that is the main setting for the movie. That's a great shame. As Tau starts to become more and more tedious, it becomes apparent that we may have been better off seeing the character of Julia in some other, any other, kind of story.

But here's what we get. Julia wakes up and finds herself imprisoned, alongside some other people (let's just call them "inconsequential and interchangeable corpses-to-be"), in a house that is protected and managed by a state of the art AI system, Tau. After an escape attempt that turns the corpses-to-be into corpses, Julia is made to undergo a number of tests by the home owner (Alex, played by Ed Skrein). If she does well then the information gathered from the test results will help Alex to move ahead in his work, but she will still have to die when no longer useful.

There are a couple of half-decent ideas buried in this film. Tau itself (voiced by Gary Oldman) is an impressive creation, with a nice line in curiosity about the nature of identity and humanity. The visual FX work is generally good and the visualisations as Julia is tested or communicates with Tau offer a respite from the one main setting. Unfortunately, there aren't too many other positives I can list.

Noga Landau doesn't have the most extensive writing career (everything before this is TV, and fans of The Magicians may already be familiar with her name) and it shows here, her failings exacerbated by the fact that this is the first feature directed by Federico D'Alessandro. Neither party really knows where to go with the central idea, instead wavering between a rumination on AI and a straightforward thriller about a young woman being held captive, and what lengths she might have to go to in order to gain her freedom. The end result is a mess, and it's not even an entertaining mess.

Monroe is a saving grace, putting in yet another decent performance. She can't do much to improve the material that she has to work with, but the film benefits from having her in almost every scene. Skrein is nowhere near as good, although that is as much to do with the script as it is to do with his flat, stilted, performance. Oldman does well enough in his voice role, I suppose, but I must admit that I spent the duration of the film thinking it was Jonathan Pryce lending his tones to the AI system. A compliment or criticism? I'm not sure.

Bear McCreary provides some good music to accompany the visuals, there are a couple of moments of bloodshed that are as unintentionally amusing as they are sudden, and the overall end result is, like many other Netflix options, a harmless enough time-waster that fails to make the most of its potential. 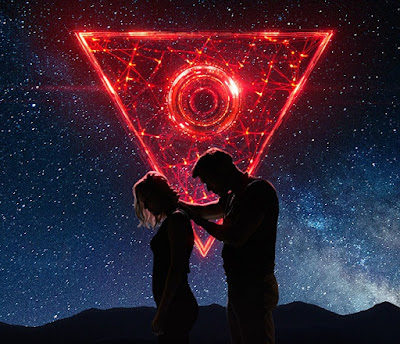