Howard Avedis may only have eleven movies to his credit, as director, but I now want to see them all. Not because Mortuary is a particularly great film, it isn't, but because the quickest bit of research has shown me that the first six films from Avedis (billed then as Hikmet Avedis) had captivating and enticing titles like The Stepmother, The Teacher, and, my favourite, Dr. Minx. How have I lived for so long without yet tracking down Dr. Minx?

But let's get to Mortuary. The film starts with a sequence that shows a man being beaten around the head a couple of times, leading to him dying in his swimming pool. That man is the father of Christie Parsons (Mary Beth McDonough) and his death was ruled as a suicide. Yeah, I don't know how either. Christie, funnily enough, suspects foul play. She investigates, aided by her boyfriend, Greg (David Wysocki), and soon finds that there's something odd going on at a local mortuary. The boss (Christopher George) enjoys leading ceremonies that have him surrounded by a number of women (including Christie's mother, Eve, played by Lynda Day George) and his son is a strange and slightly creepy Bill Paxton figure (played by Bill Paxton).

Written by Avedis and Marlene Schmidt (who helped to co-write a number of his films, and acted in all of them), Mortuary is not too bad when it comes to the nuts and bolts of the slasher elements. You have necessary motivation for the young lead to be nosing around where she's not wanted, you have one or two red herrings there, a couple of the deaths are decent and bloody enough, and the killer has an eerie and distinctive look about him/her. The only thing working against the film is the fact that, by 1983, audiences had already been bombarded by so many other slasher movies all trying to outdo one another. Mortuary doesn't try to fill the screen with gore or give you a kill every ten minutes. It instead keeps viewers entertained in different ways, with quirky character moments and a sense of playfulness throughout.

McDonough and Wisocki (the latter billed here as David Wallace) do just fine in their roles, neither becoming too annoying as they start to investigate the strange goings on around them. Both of the George cast members (Christopher and Lynda) have fun with their roles, despite (or maybe because of) having to deliver some of the more amusing dialogue. And Bill Paxton is as wonderful and watchable as he usually is, even before he has fully transitioned to the Paxton that we all grew to love throughout the next few decades.

One other thing about the movie that is worthy of note is the way in which it uses the last shot to throw the audience for a loop. I won't go into detail, and in some ways it is typical of many other horror movie "sting" moments, but it's a slightly enjoyable head-scratcher that feels more in line with the poster and marketing tactics than anything in the rest of the movie.

It's doubtful that you will love Mortuary, and you're probably not even likely to enjoy it as much as I did, but some people might. If this review gets one person to check it out, and if they watch the end credits with a smile lingering on their face, then that will do for me. 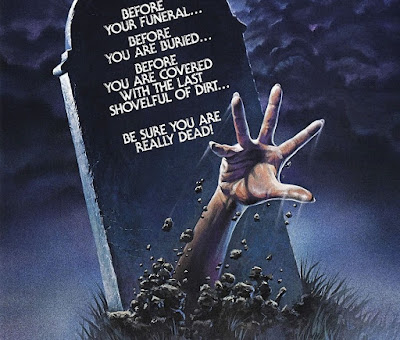