It's the turn of writer-director Ron Ford to have some fun with the Witchcraft series and, I may as well just say right now, seeing this has ensured that I won't ever seek out any of his other movies. That might seem a bit harsh (who has managed to helm one of these movies and then springboard to better things?) but there was, believe it or not, some potential here that is completely squandered.

There are three women (Lauren Ian Richards, Kathleen St. Lawrence, and Miranda Odell) who are working on their acting skills as they practice a bit of Shakespeare on stage. Their teacher (Don Donason) wants more from them. As they are portraying three witches, someone comes up with the bright idea of heading to the alleged site of three actual witches and reciting some spells to bring back their spirits. It's not long until we're treated to gratuitous sex scenes, even more overacting, the return of Will Spanner (played this time by James Servais), AND the return of detectives Garner and Lutz (still played, respectively, by Mikul Robins and Stephanie Beaton).

Someone could have taken the central idea here - women playing three witches getting themselves in trouble and targeted by the spirits of real witches - and made something moderately entertaining. Okay, there would have still been the glaring obviousness of the low budget and the various technical shortcomings, but it could have been something made with a spirited sense of fun. A little bit of wit goes a long way. Trust me, I would have lapped it up like a pool of clear water after days wandering through a desert.

Ford is instead content to go along with the template set by almost all of the other Witchcraft movies that came along before this one. Alright, there must have been a market for them, and maybe people were allowed to write and direct instalments as long as they worked within that established template, but I can't help resenting Ford for not even trying slightly to do a bit more with this story.

The cast all work at the level that those familiar with the series will expect. The three main women are identified by the following characteristics: Richards has reddish hair, St. Lawrence has blonde hair and is the one keen on the spellcasting idea, and Odell has blonde hair and seems the most reluctant to play around with the spirits of the dead. Servais is bland, his Wendy Blair (as his girlfriend) is also bland, Donason is more restrained than he should be, in my opinion, and Robins and Beaton at least get to spark off one another, even if they're stuck with a very weak script.

I'm beyond even trying to highlight minor positives at this point in my journey through the series. Anyone interested in the movies will check them out. Anyone as silly as me will not be dissuaded. Everyone else would do well to just avoid the lot of them.

Far too much money in your bank account? Then pick up this DVD. 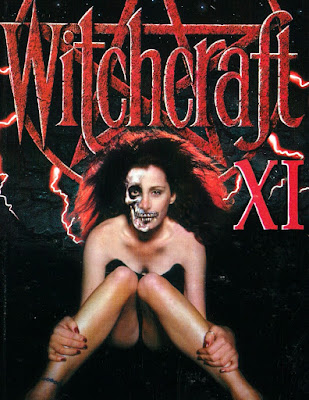