Barely stretching (no pun intended) to feature length, Attack Of The 50 Foot Woman is a fun sci-fi diversion that spends much more time on standard melodrama and relationship issues than it does on the more fantastical elements.

Allison Hayes plays Nancy Archer, a woman who is traumatised at the start of the movie when she sees something landing on the road in front of her and a large creature getting out of the craft. Viewers see this via the shot of a giant hand reaching out towards her. Nancy is keen to warn people of what she saw but few people are quick to believe her. She's known for her bouts of overindulgence when it comes to alcohol, and her emotions have been teased at and tested for a long time by her philandering husband, Harry (William Hudson). He would be delighted if his wife was declares insane and committed to a mental institution, which would leave him in control of the finances and able to give more treats to his girlfriend, Honey (Yvette Vickers).

Directed by Nathan Juran (billed as Nathan Hertz), Attack Of The 50 Foot Woman is a look at a woman turning her life around and fighting back at a manipulative and undeserving husband. It just happens to also have a space giant and that unexpected growth spurt for the main character.

Mark Hanna's script, the last in this vein from a run of these movies in the late '50s, has a bit more depth and intelligence than the outrageous title may suggest, although it's a shame that the film doesn't really deliver enough of the b-movie treats, even during the third act, which feels like it's over before it's even begun.

The cast all do okay. Nobody stands out (although Vickers easily shows enough appeal to make it believable that she would be able to keep a married man wrapped around her fingers, especially a married man as nefarious as the one played by Hudson) but they align well with the material.

Even if you end up hating Attack Of The 50 Foot Woman, the fact that it's just under 65 minutes means that you won't feel as if you have wasted too much of your time. But I doubt you will hate it.  It's almost impossible for this film to overstay its welcome, although I wish it had a few more scenes of destruction and panic.

You can buy the movie here, if you're over in America. 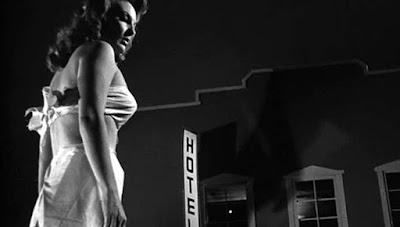