When this movie fan was a much younger, much smaller, and much more casual movie fan there were a few people who held my attention for reasons I didn't always understand at the time. I loved the main skits of Abbott & Costello, I think I had quite a crush on Doris Day, and I would watch James Cagney in anything. I also, apparently, ran to the TV when Peter Sissons was reading the news but that's neither here nor there.

I haven't watched a James Cagney movie in many years. In fact, I cannot think of any of his movies that I have revisited as an adult. Perhaps it was due to the sadness that wracked my soul every time the young me watched Angels With Dirty Faces, crying so hard at the finale that my mother would literally throw a towel at me to help me wipe my soaked face.

So I revisited White Heat with some trepidation. All I remembered about it was that it starred Cagney and had the famous ending with him exclaiming that he'd made it to the top of the world. But there's so much more to enjoy here.

Cagney is Cody Jarrett, a ruthless criminal with a master plan. He and his men rob a mail train and then bide their time. He then heads home and tells everyone to just stay calm before he heads to Illinois to confess to a different, lesser, crime that will get him a couple of years in prison. And if he is sentenced for that crime, which he is, then he assumes that the cops can't pin the train robbery on him. But the cops want Jarrett bad, so much so that they plant an undercover officer in his cell.

As well as his band of men, Jarrett also has a woman he loves (Virginia Mayo) and a mother he is very attached to (played by Margaret Wycherly). He also has occasional fits, usually best soothed by his mother. The guy has issues, proving time and time again that he's as unstable as he is conniving. And Cagney plays him perfectly throughout. He's often got a twinkle in his eye and smile, but just as often that twinkle signifies danger for those around him. White Heat is a film that is part gangster film and part tense thriller about an undercover officer trying to keep himself safe while on his mission, and it works so well because of the manic nature of Cagney juxtaposed alongside the calm demeanour of Edmond O'Brien, who plays the good guy. Mayo and Wycherly also give very good performances, damaging to Jarrett in different ways and making such strong impressions that they feel ever-present despite only being onscreen for maybe a quarter of the runtime.

Director Raoul Walsh has an extensive filmography (from Westerns to war films to much more, including a superb gangster film that paired Cagney with Humphrey Bogart, The Roaring Twenties) but this is, from what I have seen of his work, one of his very best. He doesn't shy away from the nastiness, using the charisma of Cagney to make the whole thing more palatable and entertaining than it otherwise could have been.

He's helped by a solid script from Ivan Goff and Ben Roberts, based on a story by Virginia Kellogg. Some may think that the material is handled clumsily, and there are certainly moments that let Cagney overact a bit, but it actually does a fantastic job of exploring the psyche of a scary individual while also ramping up the tension for a very satisfying third act.

A film very much deserving of the fine reputation it has, my enjoyment of White Heat means that I hope to not leave it so long until my next Cagney film viewing. I might even have to fall in love with Doris Day movies again. Maybe the younger, smaller, me actually had some taste. I'll stop short of waiting by my TV until Peter Sissons comes on to read the news though. Mainly because I assume he has retired by now.

You can shop around for a better price, but the blu is here.
Americans have this less shiny edition available. 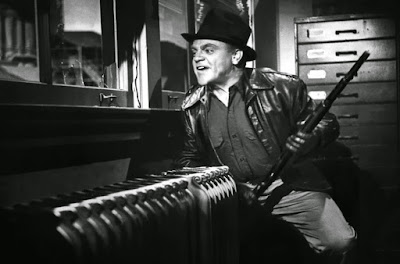