It's the fourteenth instalment in this series. I long ago gave up on the idea of any originality, or even any level of basic technical competence, but I am going to make it through this entire series, as long as I have all of my main faculties available to me (which looks less and less likely with each film I subject myself to).

Rose (Molly Dougherty) is a young woman with supernatural powers. Viewers find this out when she destroys the lover of her partner, and then goes on to destroy him. She soon comes to the attention of Samuel (Jeremy Sykes), a man who runs a yoga studio, but who is more concerned with connecting with women that he knows have certain powers. He uses Sharon (Noel VanBrocklin) and Tara (Zamra Dollskin) to make Rose feel more comfortable, all while moving further towards his nefarious end goal.

Director David Palmieri joins the series here, and he would also direct the next two films. Palmieri is either better than his predecessors at stretching the budget or, more plausibly, the lowering prices of filmmaking equipment that can provide decent results leads to this being a minor step up from quite a few of the previous entries in the series. It's still not good when compared to actual movies that have had a bit more effort put into them, but it's not as bad in terms of the visual and audio quality.

The script from Keith Parker, however, is as ridiculous and unbelievable as any of the other Witchcraft movies. I have given a brief plot summary without revealing any of the extra details, especially one or two third act "highlights", but trust me when I say that it's just supernatural silliness from beginning to end. We get returning characters in the shape of Will Spanner (played by Ryan Cleary this time), and Lutz (Berna Roberts) and Garner (Leroy Castanon), and none of them are phased by the events that they have now dealt with numerous times before.

Should I be polite about the cast members? I guess so. Nobody is there to win an Academy Award, and they do what is asked of them, overall. Dougherty is actually one of the better females to have a Witchcraft film under her belt, VanBrocklin and Dollskin are stuck with worse parts of the script, Roberts and Castanon work reasonably well together, and Sykes tries to inject a bit of fun into his performance. The only person I can't pretend to tolerate is Cleary, who is one of the worst actors to portray the ever-changing face of Will Spanner in the entire series. Sadly, as well as the director, he also carries over to the next two films. Yayyyyyyyy.

Not as painful as many of the other instalments, this still doesn't do enough to be considered a good movie.

Buy Charmed here. You know you want to. 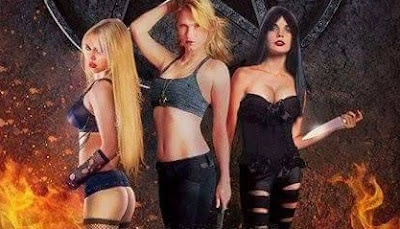