I love a good, fun, creature feature. And I love movies that can make your skin crawl as some of our smallest critters become some of our biggest enemies, be it in terms of attitude (this movie, the magnificent Phase IV, Arachnophobia) or in terms of size (Empire Of The Ants, The Giant Spider Invasion, ummmmmm . . . Night Of The Lepus). Many of these movies aren't actually any good, but I have a soft spot for them nonetheless. I either saw them when I was young enough to enjoy the thrills without feeling scared (okay, I was maybe a little scared the first time I saw Empire Of The Ants) or they always simply amused me, despite lacking the real thrills or scares that they were supposed to have. None of that really applies to this movie though. This movie is just bad.

The basic plot concerns a strain of more dangerous bees that are smuggled into America by corporate agents who have a plan for them that probably won't put the entire world in danger. Unfortunately, things soon get out of hand and the entire world is put in danger. Oh dear. It's up to an elderly doctor (John Carradine) to save the day. Not just him. It's also up to John Saxon, playing a character who feels like it was written in the script as "anyone as tough and cool as John Saxon", and Angel Tompkins (playing Sandra Miller). Bees buzz around, people flap their hands and fall over, and it all leads to a finale that you wouldn't believe was real if I described it to you right now.

Written and directed by Alfredo Zacarias, it's very hard not to think that he was, well, taking the piss. The Bees starts off quite silly and then just keeps on getting sillier and sillier. Scenes that should be tense are either incompetently staged (any major moments showing the creatures attacking tend to have them as dots passing the screen and small swarms drawn on to each frame) and the plotting is childishly slapdash and careless.

Fair play to Saxon, Tompkins, and Carradine, dlivering some of the most risible dialogue that I've heard in any movie from this subgenre. Saxon, in particular, deserves some kind of award for keeping a straight face during a final act in which he tells people in power exactly what he has managed to surmise from his time trying to understand the bees. And anyone involved in a scene that has lots and lots of actual bees around them also deserves some praise. The bees may have all had their stingers removed (not sure how that affected the poor little buggers) but my instincts would still be telling me to get the hell out of that buzz-filled environment.

It's entertaining during individual moments, but for all the wrong reasons, and that is why I score it as high as I do. Even the score is so bad that it feels as if it has been created that way for comedic effect. I advise people to avoid this one. But you'll chuckle at times if you force yourself to sit through it.

There's a surprisingly decent looking disc for this here. 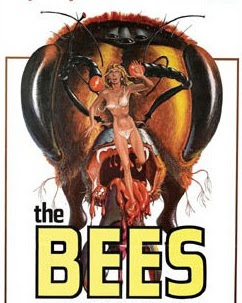