You would think that, considering the amount of movies I watch, it would take a lot to actually make me angry and disappointed in a film. I have relatively low standards. I start watching every movie while rooting for it to do a good job. And it was the same with Walk Like A Panther, a movie reworking of an idea that writer-director Dan Cadan first used just over half a decade ago on TV.

The cast made me feel secure in my viewing choice. A lead played by Stephen Graham, a main role for Dave Johns, supporting roles for the likes of Jill Halfpenny, Robbie Gee, Julian Sands, and Michael Socha. I also knew that Lena Headey appeared at some point (it's a very brief cameo though).

The plot didn't put me off either. A group of older British wrestlers, long past their prime, have to put on the lycra once again to raise enough money to save their local pub. Lessons are learned along the way, and someone finally manages to stop living in the shadow of others and grab their moment in the spotlight. Well, that last sentence was what I assumed would happen, and it did.

You get some decent songs on the soundtrack, a selection of colourful characters, and the inevitable montage moments. What you don't get is a decent smattering of actual laughs. This is a comedy in which the comedy itself is notably absent, one or two lines aside.

The great shame is that Cadan wastes that great cast. Graham tries his best with what he's given, as does Johns (playing his father), but there's only so much that can be done with the lazy script. Sands is, admittedly, allowed to have the most fun that I've seen him have onscreen for a number of years but that's offset by the treatment of Socha, reduced to the angry idiot who wants to upset everyone around him until he sees the light. Stephen Tompkinson is the pantomime villain, and Sue Johnston and Jason Flemyng are among the many people wasted in much smaller roles.

Considering how long he has been close to this material, from the time it must have taken himi to develop the TV series to this feature, it's amazing that Cadan couldn't take the time to take the premise and spin some gold from it. Because the potential is there. But nothing is done to lift it even to the level of average. Nothing. If you can't create some decent comedy from the idea of aged character wrestlers getting back into costume for a fundraising match then that's quite an achievement. The fault seems to lie squarely with Cadan and I can only feel sorry for the people involved, who obviously thought the end result was going to be a much better film.

Walk Like A Panther is available in digital formats. 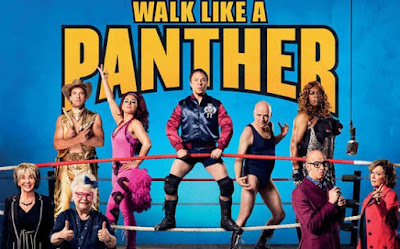