Although I didn't really dislike Red Sparrow while it was on, it's not a film I can wholeheartedly recommend to anyone, mainly because of the way it constantly wavers between being too slick and neat and being bloody and faux-gritty.

Jennifer Lawrence plays Dominika, a Russian ballerina who ends up struggling after an injury cuts her promising career short. She is then approached by her uncle (Matthias Schoenaerts) with a job offer - seduce a local gangster. That job ends in death, and Dominika is then given the option of either training to become an intelligence agent or being killed, to ensure there are no witnesses left. It's not much of a choice, and Dominika also has an ill mother (Joely Richardson) to consider. She starts her training, which soon puts her at odds with those around her, due to her strong will and determination, and then ends up heading to Budapest, where she meets an American agent (Nate, played by Joel Edgerton) who may end up being able to help her with her predicament. Or maybe she will just do her job, leaving a number of corpses in her week.

Directed by Francis Lawrence, Red Sparrow is certainly an ambitious film, considering the attempt to make an old-fashioned spy movie that will appeal to a wider age range than most. Lawrence did a decent job of mixing pure entertainment with interesting psychological moments in his three movies that made up three of the four The Hunger Games series so it's a shame that he can't do just as well here. Perhaps some of the fault lies with the script, by Justin Haythe, or perhaps the source material, written by Jason Matthews, was just never suited to what feels like a more sanitised telling of the story (despite a few strong moments).

Lawrence does a good job in the lead role, and her accent remains consistently impressive throughout. She's given good support by other fine Russians, such as Richardson, Charlotte Rampling,  Ciaran Hinds, and Jeremy Irons (obviously all picked for their talent and name recognition, as opposed to their actual . . . Russian-ness). Schoenaerts feels more obviously authentic, despite being Belgian, and he does a lot with a role that could have easily been either a pantomime villain or just a forgettable plot device.

Red Sparrow gets a few things right. The performances, the generally clean shot compositions and style (this is not a film for anyone looking out for the next Bourne), a lot of the plotting. But it doesn't ever do anything to make it stand out, cinematically, and the 140-minute runtime feels overlong by a good 20-30 minutes. But it's that inconsistent approach to the material that probably harms it the most. There are scenes that Lawrence knows can't be shown to be cool or sexy, he'd be in big trouble if he tried, but then he tries to keep everything moving along in between those scenes by utilising the star power of his leading lady, who inevitably comes across at times as, well, cool and sexy. It stops the film from having one true identity throughout.

Worth a watch, I'm just not sure of anyone who will love it, and I can't see it being one that anyone will choose to revisit more than once or twice. 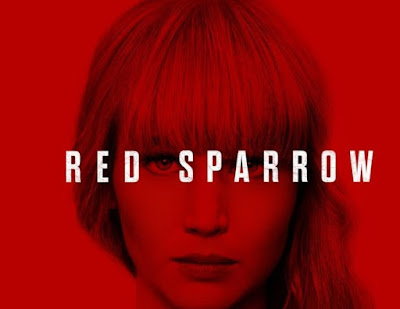