Written and directed by Jeff Nichols, Mud is a film that takes some obvious influences and then fails to shake them up and turn them into something fresh and exciting. Not to say that it's a bad film. There's enough here to enjoy, mainly the central performances, and Nichols proves a dab hand at taking plenty of small moments and putting them together to create something that feels appropriately bigger than the sum of its parts.

Tye Sheridan is Ellis and Jacob Lofland plays Neckbone, two young boys who encounter a hiding fugitive named Mud (Matthew McConaughey). He wants to get back together with his alleged true love, Juniper (Reese Witherspoon), but are his motivations pure, and does Juniper want to be with him?

Mud looks good throughout, with Nichols finding a perfect balance between the daily grime and the sun-baked freedom that the two child stars seem to have through most of their days. These kids are able to have their adventure, but it's an adventure that isn't necessarily as safe and innocent as other tales that might spring to mind. Fortunately (or maybe not), they already have enough experience to be on the look out for other dangers, even as they take a risk by befriending Mud and trying to help him out of his current predicament.

The cast are the main strength here. Sheridan and Lofland give the kind of performances that surely signal bright futures ahead for both (although it's Sheridan that seems to have more easily moved onwards and upwards). McConaughey is great, once again using his charm to soften the edges of a character who might not be as friendly and trustworthy as he tries to appear. Witherspoon does well in a smaller role, although it's hard to say that she stands out in a supporting cast that also includes talent like Bonnie Sturdivant, Joe Don Baker, Ray McKinnon, Sarah Paulson, Sam Shepard, and Michael Shannon.

The fact that this film feels more lightweight than expected isn't an unforgivable crime against cinema. It is just enough to drag the film down from great to very good. The script has a few real gems in the dialogue and exchanges but they're too few and far between, which is a real shame. Instead of having this cast deliver gold from one scene to the next we instead watch them carry a lot of the film in between the fleeting moments of greatness. But we can at least be thankful that Nichols can always spot the best talent when it comes to casting his movies.

You can buy it here.
Americans can get it here. 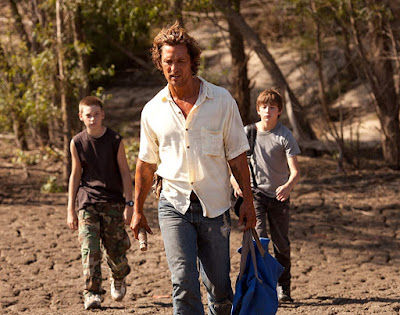