For anyone who enjoyed Abbott & Costello Meet Frankenstein, you'll be pleased to know that this movie takes another figure popularised on film by Universal and uses it to great effect opposite our comedy duo.

Bud and Lou play a couple of detectives this time, with Lou only passing the training thanks to a timely bribe slipped to the head man from Bud. The two men are put in place to help an experienced detective but, as luck would have it, Tommy Nelson (Arthur Franz) bursts in on them when they're alone in the office and assumes that they're the real deal. Tommy is a boxer wrongly accused of murder and he needs help to clear his name. To help him lay low in the meantime he takes an unstable, but effective, invisibility serum and this leads to plenty of laughs as Tommy helps Lou pass himself off as a top boxer in order to find out who the real killer is.

This is a fantastic A & C outing from start to finish, featuring a very funny script from Robert Lees, Frederic I. Rinaldo and John Grant and very capable direction from Charles Lamont, who keeps everything perfectly paced and makes the most of a few great set-pieces.

The cast are all fantastic. Bud and Lou get to recycle a few of their routines, as usual, but also get plenty of new material to wring laughs from as they deal with their invisible client. And a boxing match in the third act is chock full of great physical comedy. Arthur Franz is, obviously, not actually onscreen for all that long but he gives a very good performance, both physically and vocally. Helen Gray is very good, Adele Jergens has fun getting Lou hot under the collar and Sheldon Leonard and John Daheim do well as men running up against our bumbling heroes. William Frawley plays a detective who knows that something is going on but can't get to the bottom of it, Paul Maxey is a psychiatrist who tries to use hypnosis when all else fails and Gavin Muir is the doctor trying to find a way to perfect the invisibility serum before Tommy Nelson is driven mad.

Based more around special effects and (lack of?) sight gags, the film still has more than its fair share of great one-liners and amusing exchanges and it's one that I recommend to fans of Abbott & Costello without any hesitation whatsoever. One of their best. 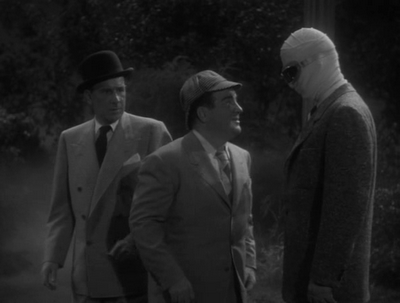