Well, I never thought I would do this but let's start this review by linking to a Daily Mail article here (you don't know how dirty and violated that makes me feel but it's necessary). That article details the sad story behind the name change for this film, another "mockbuster" from The Asylum that was originally slated to be released as American Battleship. Now, while I appreciate that many people hate The Asylum and can't even begin to understand why I tolerate their movies I can also appreciate these two facts:

1) The most common complaint levelled against The Asylum is a lack of originality. They're just copying the big, upcoming releases and trying to cynically cash in on big names. This is often very true. They do copy successful formulae and try to make as much money as possible before anyone cottons on to the fact that their film might be rubbish. And here's the thing about that - it's the exact same thing that Hollywood does every single week of the year. They may not be quite so upfront about it but does that make their moneymaking endeavours any closer to having artistic integrity? No, not at all. ARTISTS in Hollywood CAN have artistic integrity, of course, but I am talking about the big picture of the whole Hollywood game. The fact that Universal were worried by a small movie that looked to ride on the coat-tails of a blockbuster based on a boardgame is ever so slightly sad. One film is pretty much as unoriginal as the other so, to paraphrase that old AvP tagline - whoever wins . . . . . . . . audiences lose.

2) The word battleship is a word to describe a big ship that can take part in a battle. I'm pretty sure that the word existed before the game came along. Now, fair enough, if The Asylum tried to release American Hasbro Battleship I could see that being a problem but they didn't. They used A word that was shared by a big, recent release. If I wanted to write and develop a movie called Battleship Bomber I don't see any reason why that would be a problem. Or even writing and developing a film called British Battleship. I'm not denying that the content is another issue altogether, all I'm saying is that whatever Universal wanted from The Asylum a title change should not have been on the cards.

Anyway, after upsetting a number of people with those views, let me get on with the review.

American Warships is about a big BATTLESHIP* that finds itself warring against an invisible opponent. Other countries are suspected of starting hostilities and the world may end up on the brink of nuclear war but the only thing concerning the crew of the BATTLESHIP* is defeating the enemy before they are themselves destroyed.

Written and directed by Thunder Levin (which is one of the greatest names I have ever heard in my entire life - I now wish I had called my kids Thunder, Lightning and Hail), American Waships is a diverting enough piece of hokum. The main premise is completely ridiculous, of course, but then the same thing could be said of many other movies out there at your local multiplex (with hundreds of millions of dollars thrown at them). At least this film has a nice, but completely random, THX-1138 reference in the mix.

The special effects aren't so special but, overall, they do the job required when it comes to scenes featuring a BATTLESHIP* shooting at an unseen enemy. There are a few moments that are eye-searingly awful (a bunch of Navy SEALs trying to board the invisible craft ranks is laughably bad and looks like it was put together with a photobooth app) but it's generally a huge improvement over the cheap wire-frame Amiga 32-created models that The Asylum tend to put onscreen.

The cast aren't all that bad either. Mario Van Peebles is the man in charge of the BATTLESHIP*  and there's also a small role for the great Carl Weathers. It helps that Johanna Watts is absolutely gorgeous to look at while playing Lieutenant Bradley and the supporting players include Nikki McCauley as a bit of a brainy type who may just be able to come up with some alternative solutions to defeat the enemy and a bunch of disposable men playing . . . . . . . . . disposable men.

It's not a movie that you'll want to rush out and buy (films from The Asylum rarely are) but if you're attracted to the dumb premise then you should find enough here to keep you entertained from start to finish. Especially if you're a fan of BATTLESHIPS*.

*The word BATTLESHIP/S is being used in this review simply as a descriptive word and not in any way relating to the trademarked boardgame. 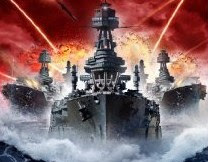 YOU can help to support this blog, and help me to keep bringing people a movie a day with these handy links. Every copy of my book sold gets a few pounds in my pocket, and gets you a good read (if I say so myself). So please feel free to remember me whenever you're visiting Amazon.

As much as I love the rest of the world, I can't keep up with all of the different links in different territories, but trust me when I say that it should be there on your local Amazon.
Posted by Tylerandjack at 21:12