The One And Only, Genuine, Original Family Band (1968)

How very strange. How very, very strange indeed. The One And Only, Genuine, Original Family Band is an oft-overlooked Disney movie that stands up today as nothing more than a real curiosity piece, mixing political debate with a number of lacklustre songs and the opportunity to see the big screen debut of Goldie Hawn (billed here as Goldie Jeanne Hawn) sharing space on the same cast list as future partner Kurt Russell. Their relationship may not have developed until about 15 years later but it's still fun to spot both of them in their youth, oblivious to what the future would hold.

The plot of the film is based on a book by Laura Bower Van Nuys and concerns the Bower Family Band (kind of like The Osmonds . . . . . . . . if The Osmonds had spent the peak years of their career singing and dancing in large barns). The Bower Family Band are all set to head off to sing a rally song for Democratic Grover Cleveland at a convention when the pretty Alice Bower (Lesley Ann Warren) receives a visit from a male suitor (Joe Carder, played by John Davidson) who somehow convinces the family to move to Dakota. Dakota just happens to be full of Republicans and this irritates Grandpa Bower (Walter Brennan) so much that he decides to upset as many people in the state that he can by being as vocal as possible about how happy he is to be a Democrat.

I honestly don't know what to say about this movie, it was such a strange mix. Yes, the ultimate message is (as you would expect from Disney) all about getting along with each other and how people can be judged separately from their political leanings but this is still a bizarre premise in which to throw some song and dance numbers.

Lowell S. Hawley was responsible for the script and Michael O'Herlihy was the director so they can share the blame for the fact that this is a dull movie. Yet I'm not sure it's fully their fault, surely there would only be so much you could do if given such a premise to work with (as in "hey, we have an idea mixing politics and a family band so go and make it into a kid's movie that runs for just under two hours for us").

The cast are a mixed bag. Walter Brennan is very good as the opinionated Grandpa, Lesley Ann Warren is lovely as Alice and John Davidson does what he can with his character. Young Kurt Russell is amusingly teeny tiny and Goldie Hawn is all smiles and big, big eyes in her small role but at least they both make an impression, unlike almost every other cast member onscreen. Steve Harmon, playing Ernie Stubbins, makes quite an impression in the big final dance number but only because he seems to be given a surprisingly feminine set of dance moves while he keeps a rictus grin in place.

I guess I can see this appealing to kids who might put up with the boring stuff in between the livelier moments of song and dance but, to be honest, I wouldn't bet on it. It's maybe not the strangest film that Disney ever released but it's certainly one of them. 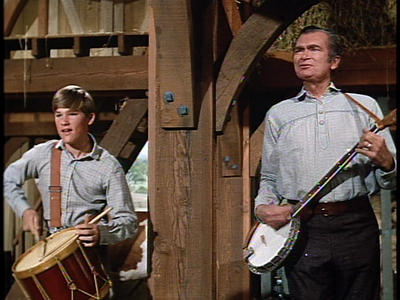