Another day, another release from the lunatics who run The Asylum. This time it's Nazis At The Center Of The Earth. Reminding people that they don't just try to cash in on the success of big blockbusters, The Asylum try to make a quick buck off the b-movie greatness of Iron Sky. Considering that the last time they tried to copy such an enjoyable cult hit we ended up with the awful Snakes On A Train I wasn't holding out too much hope for this one. Thankfully, I was very wrong and this movie turned out to be absolutely mad in all the right ways, a deliriously ridiculous slice of hokum. In fact, it's SO hilarious and over the top that I couldn't help thinking I'd already seen it all done before in an episode of Futurama. Fans of great cinema should turn away now but anyone who shares my fondness for the dubious delights released from The Asylum should enjoy this one.

As if I really needed to explain the plot to you, it's all there in the title. A bunch of young folks working in  Antarctica are a bit bemused when a couple of their colleagues disappear. They're quickly even further bemused when they go looking for the missing colleagues and find an underground area that houses a bunch of zombie Nazi types engaging in experiments to prolong their lifespans.

The experiments are being led by a certain Dr. Mengele (Christopher Karl Johnson) and he's very pleased when he captures his latest group of "test subjects". Surely it won't be long now until he discovers the breakthrough that can lead to a big, pissed off, zombie robo-Hitler.
See what I mean now about the Futurama episode? Am I right or am I right?

With this completely ridiculous premise to work with, everything else pretty much has to aim at a certain level. The script by Paul Bales is suitably hilarious (in a number of intentional and unintentional ways) while the direction from Joseph J. Lawson just rattles through one gloriously daft moment after another. The special effects are often a bit better than past efforts from the studio (I think they just maybe have more programs locked in place and stock footage in the vault after each movie) and the whole film is boosted by the fact that it's so hilariously tasteless.

As for the cast, they're not really a memorable bunch. Jake Busey is the most recognisable one here, and his first scene is very funny (he gets to spout a lot of scientific nonsense before we are quickly made aware of just what a maverick he is). Dominique Swain is likeable enough, as is Josh Allen, while Christopher Karl Johnson makes Mengele into a good villain. As for everyone else, they all do well enough and deserve a bit of praise for going along with the whole absurd concept.

Once again, this is a movie that shouldn't be rated highly by anyone who loves cinema (and I like to class myself as a cinema lover, despite my dodgy viewing choices) but it's so much fun and so damn entertaining from start to finish that I can't place it on the lower end of the scale. Therefore, I shall defend my rating in this way - the movie is fun and lively and deserves an above average score BUT it also tries to cash in on the success of another movie, has one or two moments of tedious exposition and doesn't really step up a gear during the third act so it sinks to a below average score BUT it has some good effects here and there, a distressing male takeover of the pro-choice movement and zombie frickin' Nazis. I fully expect to be met with derision on this one but the final score manages to edge just above average. 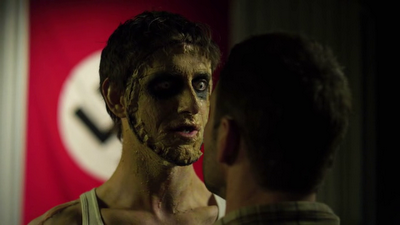