I love Creature From The Black Lagoon. Absolutely love it. Despite stiff competition from other classic movies, it is one of my very favourite Universal horrors from the era that gave us a number of definitive works. Beautiful, tense, haunting and surprisingly sympathetic to the main creature.

I didn't hold out much hope for the sequel because I knew that it would take something very special indeed to equal that first movie. As I expected, the sequel is a lesser movie but it's not a terrible one and it, once again, proves to be sympathetic to the creature by showing his poor treatment at the hands of lousy humans.

Following on from the events of the first movie, though it's made clear that some time has passed, the poor creature is this time hassled by a new bunch of folks (the one familiar face is Lucas, played by Nestor Paiva, who is once again guiding the boat for them). This time the creature is caught and taken back to an aquarium in Florida, to be put on display and poked and prodded and studied and trained. Understandably, the creature is none too happy about this and seeks an opportunity to escape, much to the upset of everyone in the local vicinity.

Martin Berkeley is responsible for the screenplay this time around, which isn't the strongest aspect of the movie, and Jack Arnold returns to the director's chair to make this a reasonable follow up to a real classic. The underwater photography isn't as good as it was in the first film but it's still the best part of the film, not counting the plotting that doesn't mind showing our lead characters (played by John Agar, Lori Nelson and John Bromfield) in a bad light.

The acting isn't too bad but the cast are weighed down by the screenplay, which isn't really terrible but remains terribly dull for large portions of the runtime - whether it's because of scientists discussing the creature or the uninvolving plot strand showing the relationship that blossoms between Agar and Nelson. Of course, the best performances come from the people you don't get to see, Ricou Browning who played the creature in the water and Tom Hennesy who played the creature on land.

Eagle-eyed fans of Clint Eastwood will want to watch this to see his uncredited appearance as a scientist monitoring some rats while everyone else should watch it simply because it's another great creature feature starring the best misunderstood gill man to ever be forcibly moved from the Amazon. 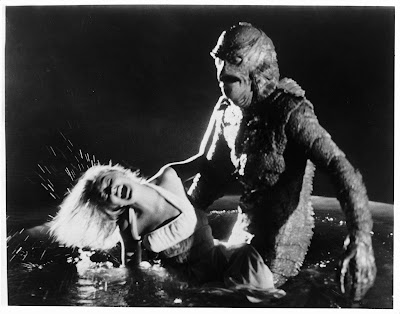