It's long been an established fact that dogs are sweet, loving creatures who will do anything for their owners while cats are vicious bastards who stop by to occasionally use their claws on your lap before buggering off to eat a few nibbles and then sometimes returning to grace you with their company. Okay, so many cat lovers may disagree with that summary but there's no denying that, over the years, cats have had more strangeness and mystery associated to them than dogs ever have. They have been deified at times, they seem to have some power, some connection to other realms . . . . . . . . . if you believe in that sort of them. The scariest thing about a dog is simply finding out it has silent but deadly wind after a hearty meal.

We know that cats are creatures to sometimes be wary of. Byeon Seung Wook , writer and director of this movie, also knows this and he makes good use of that fact in this enjoyable horror movie that should find a receptive audience in fans of South Korean cinema.

So-yeon is a young woman who suffers from claustrophobia and who is, let's say, still a bit jittery many years after a traumatic childhood event. She still has a relatively normal life, however, and especially enjoys her work at a pet-grooming store. When one of the clients dies in mysterious circumstances, So-yeon is asked to temporarily look after her cat and she does so . . . . . . . . . . . but there's something strange about the cat. Or perhaps So-yeon is just unsettled by the figure of a young girl with cat-like eyes she keeps catching sight of.

The Cat starts off strong. It's got some good jump scares and a few great moments of tension. The acting from all concerned is very good, especially from Park Min Young and Kim Dong Wook, and the style mixes in some strange effects with the shadows and darker colours to make things easier on the patchy CGI. It's just a shame that everything starts to go downhill in the second half and viewers of the many great horrors from places like Korea and Japan will start to get a definite feeling of deja vu. Because after an interesting first half this becomes, sadly, just like 101 other movies that we've seen over the past decade. Dark Water, The Eye (which remains one of my favourites), Cello, Phone, Shutter and many, many more will come to mind as the details of the plot are revealed. That doesn't make The Cat a terrible movie, it just makes it a disappointing and unoriginal one.

Please note, I saw The Cat thanks to a friend who had ordered the disc from YesAsia.com but I have no idea of their delivery times, pricing compared to any other available sellers, etc 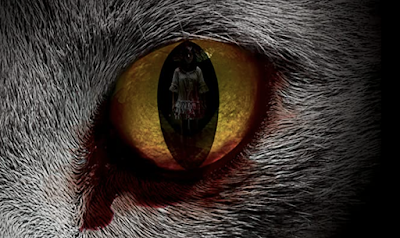