When a couple (Erika Christensen and Jesse Metcalfe) have their young son snatched away from them they are understandably distraught. They want him home, alive and well. Bill Moseley plays the kidnapper and by the time he is apprehended it's too late. A young life has been snuffed out. This all happens within the first 10 minutes of the movie so I'm not spoiling anything here for you. The film really gets going when the grieving parents attend the trial of the murderer and find themselves unable to accept anything less than the death sentence. They find themselves getting more and more frustrated with each day that the killer continues to live that they decide the most satisfying justice will be their own. They hatch a plan to create the time and opportunity to have some "alone time" with the killer of their son.

The Tortured is an okay movie, especially during the middle section that features an awful lot of time showing someone being, well, tortured. Sadly, it all comes completely apart during an ending that is as implausible as it is insulting (yes, it IS insulting). Director Robert Lieberman may take some of the blame for not making the best movie possible but the worst offender here is writer Marek Posival, who was either thinking that he was being very clever while actually being very stupid or was, quite possibly, just taking the piss.

The acting by everyone onscreen is passable for this type of material but it's a real shame that this couldn't have been more carefully considered and balanced and thought-provoking. The central idea is an interesting one, as tempting as it is shocking. IF such a tragedy occurred in your life (touch wood that this should remain purely hypothetical for all) would you not want to take matters into your own hands? Such thinking has led to disturbing films such as The Last House On The Left, Straw Dogs, Death Wish and many others but The Tortured distances itself from superior offerings by providing no depth with the exploitative shocks. It doesn't want you to think about things or actually use the movie as a jumping off point for discussion and debate. It just wants to appeal to your basic bloodlust. That's all well and good if the movie was happy to aim at that level but that godawful ending shows that there are some loftier ideas shoehorned into the mix. That's when failure takes root, because a movie has to be a damn sight better than this one to get away with such bloody cheek. 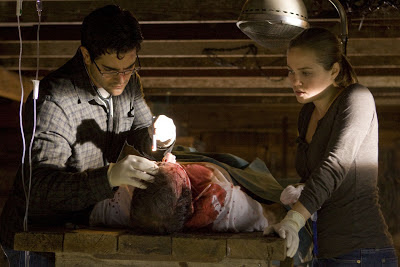