Based on the classic tale by J. M. Barrie, Peter Pan is as easily enjoyable today as it was for audiences almost 60 years ago. It's lively, colourful, full of great characters and has a couple of excellent songs (plus one about "Red Indians" that adds yet another black mark in the Disney big book of race relations). The fact that Peter Pan himself is a bit of an arrogant git, that Tinkerbell is a moody wee lass and that Captain Hook is one of the more likeable characters onscreen (with the exception of the Darling children) doesn't matter - the final result is just so good that any negative points can be easily overlooked as you venture through Neverland and take in all of the sights.

Our story begins with Wendy Darling (voiced by Kathryn Beaumont) telling stories of the brave Peter Pan and his battles with the dastardly Captain Hook to her younger brothers John and Michael (voiced by Paul Collins and Tommy Luske, respectively). The fun and games come to an end, however, when father appears and has his say. Wendy should grow up and stop telling the boys such tall tales. But they're not tall tales, not quite, because when the parents head out for the evening who should stop by but Peter Pan (voiced by Bobby Driscoll), the boy who never grew up, and once he gets his shadow reattached and sprinkles the Darling children with some dust from Tinkerbell he can take them all on a flight to Neverland to see everything with their own eyes. Of course, with Peter Pan being real that means that Captain Hook (Hans Conried) and his pirates (including Bill Thompson as Smee) must also be real.

It took about four directors and eight writers working on this over the years to produce the final film that we have with us to this day and what a great result. Walt Disney was actually said to be disappointed with the finished product because of how Peter Pan was represented but I like the fact that he's a bit of a brat. If you never grow old then it makes sense that you can allow yourself to be constantly carried away with every childish whim and daydream you have and that you can easily get too big for your boots, as most kids do during any extended playtime.

The movie has some minor flaws - the biggest one being the blandness of The Lost Boy although I am almost equally disappointed by a lack of any seriously dark moments - but I could still see myself easily agreeing with anyone who decided to choose this as their favourite, perfect movie pick

The vocal cast is superb but it's Hans Conried who takes the prize for his wonderful mix of menace and deviousness in the portrayal of Captain Hook. To be fair, it's often the baddies who are the most fun characters in the Disney animated classics but Captain Hook is still, for me, one of the very best.

Songs include famous titles such as "The Second Star To The Right", "You Can Fly, You Can Fly, You Can Fly!" and  "Following The Leader" but there are also some other, very enjoyable, tunes in the film and, despite the lack of political correctness, I'd have to include "What Makes The Red Man Red?" as one of them.

If you're a youngster or just young at heart, this remains a fantastic interpretation of a children's tale and an animated classic to brighten up any day. 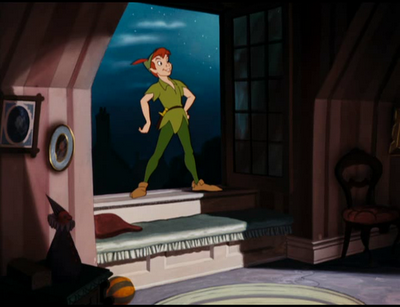