Abbott & Costello return for another comedy adventure, this time taking place (as if you couldn't guess from the title) in Africa. Featuring the standard attempts to get rich, the usual misunderstandings and moments with Lou being placed in peril, Africa Screams also benefits from the dangerous environment that our leads find themselves in.

It all starts with a map in a book that has since become quite untracable. Hillary Brooke plays a woman who wants that map and when she finds out that Lou, apparently, has it memorised and can draw it out for her she makes our duo a fine offer. But is it really a fine offer, considering what may be located with the help of the map? And when did Lou develop such a great memory and a skill for cartography?

Whenever I see any footage shot in a jungle environment I am always reminded of just how dangerous those places are. From the smallest bugs to the largest carnivores, it seems like everything is out to prey on any unsuspecting interloper. Back in the 1940s places like the lands of Africa were even more exotic and dangerous than they appear to us today and this movie really capitalises on every aspect of that. Danger comes from crocodiles, lions, traps set by hunters and, of course, scary tribal folk (pretty much a staple of this material in any movie made before the age of broadened horizons and political correctness).

The leads are on top form, even if the material isn't. Don't get me wrong, there are many laughs and great moments but none of the absolute classic routines appear here. It doesn't matter, however, and Earl Baldwin peppers the script with plenty of minor chuckles in between the big set-pieces until a finale that drops the ball slightly when it chooses to unwisely pile on the antics of the animals with the humans getting in the way of each other.

Charles Barton does another great job in the director's chair, helped by A & C, the casting of Frank Buck and Earl Baldwin playing versions of themselves, Hillary Brooke planning to double-cross the boys whenever she can get the right time and opportunity and Joe Besser and Shemp Howard joining in with the fun.

I'm not sure what the general consensus on this one is but I, for one, really enjoyed it and heartily recommend it to other fans of the boys. 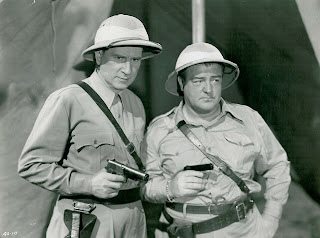