An offshoot from the main Subspecies movies, this film focuses on vampire Ash (Jonathon Morris) and the man (Zachary, played by David Gunn) who seeks to stop him from biting any more women on the neck. The odds may be stacked against him but it's as good a time as any while Ash seems preoccupied with numerous other problems involving those he thought he could trust.

Once again written and directed by Ted Nicolaou (who, of course, helmed all four of the Subspecies movies and also wrote three of them), this film may run low on actual thrills or horror but it's a decent enough bit of gothic melodrama that should please fans of Anne Rice.

Characters spend an awful lot of time brooding over their past and contemplating their futures while not much happens. But it's all so degrading and horrible being a vampire, don't you know. Well, that would seem to be the case for anyone who doesn't just make the best of the situation and turn all ruthless with their fangs ever ready a la Ash.

A script that always teeters on becoming outright laughable is not helped by a pretty weak cast (the great work from Anders Hove is sorely missed in a film that stems from a franchise he towers over). Jonathon Morris does okay but, as I said in my review of Subspecies 4: Bloodstorm, he just seems so out of place because of how I grew up with his TV work here in the UK. David Gunn is a wet blanket, with the material mostly to blame for it but his performance isn't great either. Kirsten Cerre, Starr Andreef and Ilinka Goya have fleeting moments that allow them to make a better impression but the rest of the time they are consigned to the background and undeveloped. Mihai Dinvale is fun to watch (though not as much fun as he was in Subspecies 4) and that covers the important cast members.

Basically, what you get here is a cross between the Subspecies movies and a gothic video for a rocking power ballad. Think of it as Interview With The Meatloaf, if you like. Is that a bad thing? No, actually, if you know what to expect from it then it's perfectly acceptable. It's just a shame that it couldn't be a bit more creative and energetic to make up for the weak script and cast but some bloodshed occurs now and again and it all looks pretty enough so while it's nothing I can honestly call good I don't feel that it's something I can honestly call bad. Therefore, the rating is slap bang in the middle. 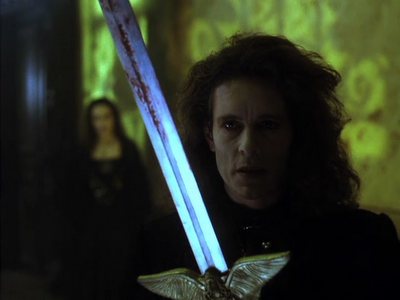