Where The Wild Things Are is, as most of you probably already know, a film based on the beloved book by Maurice Sendak. I never read the book, neither in childhood nor at a later stage, so I can't comment on the adaptation of the source material but I have seen some of the artwork and must say that the film certainly seems to brilliantly realise the creations of Sendak. Directed by the enjoyably offbeat Spike Jonze, who co-wrote the screenplay with Dave Eggers, there's a lot to enjoy here but also a few choices and moments that I just can't help thinking spoiled what could have been a really great film.

Young Max (Max Records) is an energetic and moody young man. He also seems to be quite a lonely boy, as seen in the opening sequence of the film in which he tries to get his sister to play with him, attacks her friends with snowballs and then gets upset when the whole thing backfires and his freshly-made igloo is brought crashing down around him. His mother (Catherine Keener) eventually comes along to make things better but she's a very, very busy woman. The time with his mother is clearly Max's favourite time but he doesn't have a very good way of showing this. In fact, he simply ruins an entire evening when he's jealous of the fact that she has male company round and then runs off . . . . . . . . and this is when the film finally hits its stride. After jumping into a boat and sailing as far as he can, Max ends up on an island populated by strange, wild creatures. At first they are tempted to eat him but he convinces them that he is a king and will lead them to a happier future. Of course, that's easier said than done and as things don't go according to plan Max starts to realise just how his behaviour impacts on others. Maybe.

With some absolutely wonderful creature creations - voiced by a great selection of people including James Gandolfini, Catherine O'Hara, Lauren Ambrose, Paul Dano, Forest Whittaker, Chris Cooper and Michael Berry Jr - and a magical way of replicating that childhood sense of freedom, imagination, rulebreaking and entitlement, Where The Wild Things Are is a superb film for reminding you of just what it is/was to be a child. It's not a children's film though, not really. Some moments are a bit too dark, not enough is spelled out in more obvious terms for kids to learn lessons from and the emotions and various relationships shown are slightly too open and honest in a way that befits the behaviour of children looked at studiously by adults. It's a hard thing to describe, and I don't really want to pigeonhole the movie, but I'd say that the whole thing certainly aims to prompt feelings and memories of childhood rather than appeal directly to children.

The acting is great from everyone involved, whether they're visibly onscreen or just being heard or even being one of the hardy physical performers wearing the wonderful creature suits.

What spoils the movie, for me, are the bookends. The time spent with Max on the island dealing with the creatures is fantastic stuff, it's funny and thrilling and uplifting and saddening and all over the place like the typical rollercoaster of emotions a child can go through on any given day. Sadly, there's nothing to like at the start or end of the movie. I don't require it in every movie I see but there's no real resolution here and it's a film that cries out for one, whether it occurred in the original story or not.

Spike Jonze has yet to create anything that I have seen and disliked (from his music video work to his wonderfully unique movies) but this is the one that proves to be the least satisfying so far. The fact that I still rate it so highly is just testament to how truly great the main middle section is. 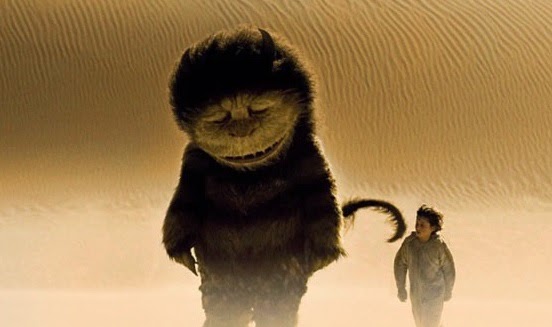