He's the main star here despite the fact that he's barely onscreen for a third of the runtime. That's irrelevant. The whole movie revolves around Ron Jeremy's most famous attribute. Yep, as you could probably have guessed, while shooting an adult sex movie out in the middle of nowhere a ray from space hits Mr. Jeremy and ends up taking control of his penis. This leads to the penis causing all kinds of problems when it detaches itself from Ron and starts inserting itself into anyone it can find, and doing so with such force that they end up dead. As the snow keeps falling outside things are definitely heating up inside but not in the way that was intended when the crew first arrived on location.

One-Eyed Monster is completely ridiculous, full of bad taste gags and doesn't even have all that much nudity, considering the central premise. It's also very funny and entertaining from start to finish.

The cast may be a mixed bag but the good performances far outweigh the bad, despite how silly the material is. Alongside Ron and colleague Veronica Hart there's also some screentime for another starlet from the adult entertainment industry, Carmen Hart, and then the rest of the cast includes Amber Benson (probably best known to everyone from her turn in the Buffy TV show), Jason Graham, Charles Napier, Jeff Denton (grabbing most of the best lines), Bart Fletcher, Jenny Guy and John Edward Lee.

Director Adam Fields (who co-wrote the movie with Jordan Fields and Scott Fields) does a great job of walking a fine line between outright absurdity and self-aware fun. Hell, I'd give a beer and a pat on the back to whoever came up with the great line "we're gonna need a bigger tampon" that manages to, of course, reference Jaws and keep things amusingly distasteful. 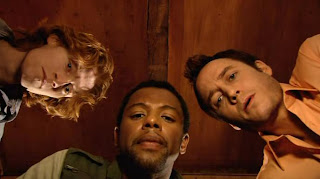