If you're going to pick a movie to remake then instead of taking on the classics, the Big Guns (if you will), things always seem to turn out better when the film being remade is a fondly remembered slice of fun  that can easily be adapted for modern audiences without losing the essence of it.

Night Of The Demons was a great movie but it was no classic. It was simple, it was fun and it had some excellent special effects. It also had a couple of very memorable moments featuring Linnea Quigley.

This remake takes the basic premise - a bunch of kids go to a Halloween party at a house that contains some tricky demons wanting to possess them - and uses a fantastic cast to great effect. It might be ridiculous and over the top in places but the original was no big lesson in subtlety either, so I don't see any problem.

Shannon Elizabeth plays Angela, the party hostess who unwittingly kickstarts the mayhem, and most of the movie focuses on her and the six others in the house (Monica Keena, Bobbi Sue Luther, the gorgeous Diora Baird, Edward Furlong, John F. Beach and Michael Copon). There's a cameo for the always-good-to-see Tiffany Shepis and an even better cameo for Linnea Quigley that changes an iconic moment from the original movie. Characterisations are slim but no matter - this is about young folk running around a house at night and trying to escape the clutches of demons.

The script written by Jace Anderson and director Adam Gierasch isn't the greatest ever but it references some of the best bits from the original - penned by Joe Augustyn and directed by Kevin Tenney - while joining the dots as we go from a solid prologue to a quick set-up to the beginning of the madness to a sustained sequence of fun and thrills that makes up the second half and finale.

The cast are a mixed bag but all do fairly well. Monica Keena is a likeable enough potential leading lady, Shannon Elizabeth does fine in the role of Angela, Bobbi Sue Luther is slightly underused but lovely anyway and I think I already mentioned the gorgeous Diora Baird (who also gets the two best moments in the movie). Edward Furlong is a bit of a disappointment and Michael Copon is even more underused than Bobbi Sue Luther but John F. Beach is very entertaining as the one male character you actually care about.

I've seen plenty people complain about this one but I honestly think that it's just an automatic "this is a remake so it's awful" reaction because I rate it exactly the same as the original. It has all of the same ingredients, including the failings, as the 1988 movie and it's slickly put together for 21st century audiences. 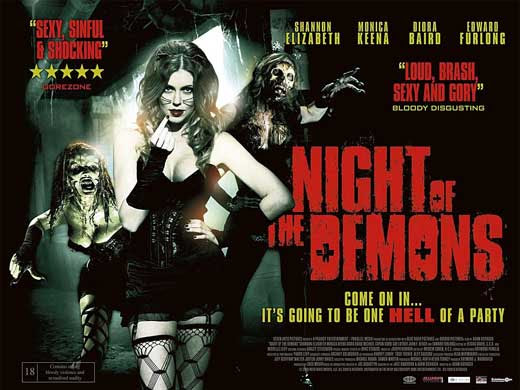