If you go to check out Strippers Vs Werewolves on IMDb (where it has an undeserved general rating of 3/10) then you will find that someone has added this little titbit to the trivia section - "Only took £38 at the British box office. This means only four people payed to see the film at the cinemas." I would urge you to ignore that fact for two reasons. The first is that Strippers Vs Werewolves isn't really a movie made for a cinema viewing (the fact that it had a limited release at all surprises me). The second is that, despite a number of flaws, this is a perfectly enjoyable comedy horror, with much more emphasis on the comedy than horror.

When one of her clients gets a bit carried away with himself and things get hairy, stripper Justice (Adele Silva) stabs at him with a silver pen and he dies. A death isn't good for business in any strip club so it's up to poor doorman Franklyn (Nick Nevern) to make the body unidentifiable and get rid of it, as ordered by club owner Jeanette (Sarah Douglas). Unfortunately for all involved, the dead man had some tough 'n' nasty gangster/werewolf mates (led by Ferris, played by Billy Murray) and when they realise that something is amiss they set out to find their friend. When they discover the corpse the only thing that matters to them is retribution. Can a bumch of strippers avoid becoming the main course for these furry fiends?

Okay, it's a dumb film, admittedly. Yet it's full of energy, has some genuine funny moments/lines and provides exactly what the title tells you. The strippers may, for the most part, be rather implausibly averse to nudity but you still get to enjoy the lovely Silva in skimpy attire, the gorgeous Barbara Nedeljakova, a few moments onscreen for Lucy Pinder, Ali Bastian, Coralie Rose, Rita Ramnani and Charlie Bond. Sarah Douglas was very good in her role and there's also a fleeting cameo in the last few minutes for Lysette Anthony. For the male portion of the cast you get the aforementioned Murray, the great Martin Compston, Simon Phillips in a very funny role and limited screentime for the likes of Alan Ford, Steven Berkoff, Martin Kemp and Robert Englund.

The script by Pat Higgins and Phillip Barron isn't too bad at all. It often throws in a few too many crude moments to keep our villains cloaked in their London hardman personas but it's also funny when it intends to be and has a nice couple of references to the greatest werewolf movie of all time AKA An American Werewolf In London (at one point a character considers a ragga version of "Bad Moon Risin'" and at another point we get the "you made me miss" line, albeit quite poorly delivered).

The direction from Jonathan Glendening keeps everything moving nicely. Some may find it overedited and too indulgent in places (with split-screen work and funky transitions) but I felt that every choice just added to the fun and energy of the thing. This is certainly a marked improvement over Glendening's last werewolf movie (the dire 13 Hrs) and I hope he continues to work with livelier material like this in the future.

You may think, from everything that I've written here, that this is a fantastic movie and pretty much unmissable. That's not the case, not by a long shot. What drags the film down? Well, the biggest problem with the movie, sadly, is the look of the werewolves - the first time I saw them I must admit that I laughed although the effects did grow on me as the film played on. The other main problem with the movie is that a lot of the humour is silly. Silly can be enjoyable enough, which is why I ended up liking the film anyway, but it's never as good as smart humour, in my opinion.

Having said that, few other films feature a finale that has a number of strippers dressed in Red Riding Hood attire set to do battle with a bunch of gangster werewolves. In that respect, I'll take this over any rubbish Catherine Hardwicke film any day of the week. 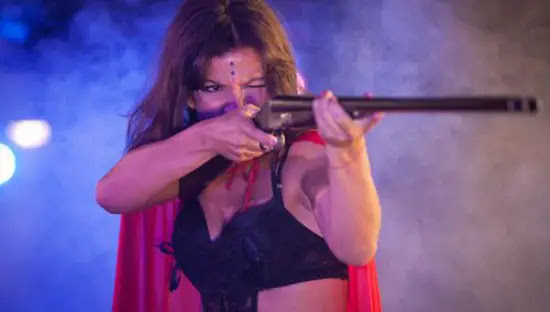