A bit of a fan favourite in the horror community, Danielle Harris takes a turn in the director's seat for this enjoyable horror comedy. She doesn't take any great risks - it's firmly planted in the genre that made/kept her a star, and a few of the people onscreen seem to be people that she's been friends with for a while - but that doesn't make it unworthy of your time.

It's a familiar scenario. A bunch of friends are all invited to an evening out, and it's not long until everyone realises that someone has an axe to grind. Once things start going painfully wrong, the guests are offered the chance to either take some punishment or allow someone else to be dealt with, similiar to the sadistic, twisted fun of films such as Would You Rather.

The assembled cast, featuring the likes of A. J. Bowen, Jennifer Blanc and Brianne Davis, all do decent work here. Nobody is going to the Oscars on the strength of this movie, but they're all having fun, and many of the faces will be recognisable to horror fans. There's also a cameo by Kane Hodder that some will enjoy, although I just found it a bit irritating.

Alyssa Lobit is always enjoyable whenever she's onscreen, and she also wrote the script. Unsurprisingly, she gets most of the best lines, although she shares a number of enjoyable dialogue exchanges throughout the movie, allowing everyone to have at least one particularly good utterance.

As for the actual direction, Harris does a decent enough job. The movie is small, keeping a tight focus on the dinner table and the people in attendance (with one or two flashbacks making use of different rooms), but it never feels dull, or even claustrophobic. I guess that's to do with the character interactions, and the way in which the plot is teased out, despite the predictability of the individual moments.

Horror fans should still get enough enjoyment out of this to make it worth at least one viewing. It may be lightweight, and it may not deliver anything original, but it still manages to entertain, and the first third of the movie lets horror fans feel as if they actually ARE among friends. 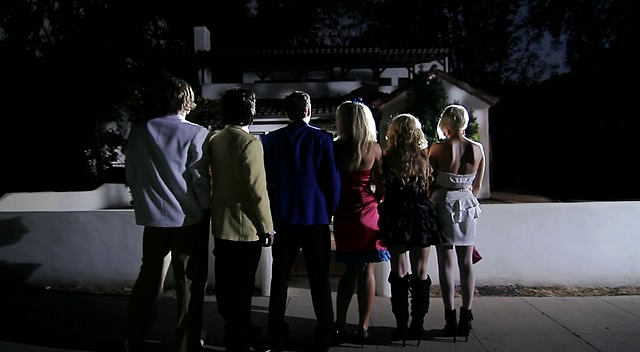