A decidedly average Disney movie that, unsurprisingly, I enjoyed more when I was a bit younger, Blank Cheque (or Blank Check) is one of many movies selling its concept in the title.

Brian Bonsall plays young Preston Waters, a lad who never seems to get what he wants, and never has much pocket money. So when he's almost hit by a car backing into him he thinks he's hit the jackpot when the harried driver (Miguel Ferrer) hands him a blank cheque. Preston then makes the cheque out for one million dollars and heads to the bank the next day. Amazing as it seems, he receives the money, but that's not necessarily as good as it seems. Ferrer, you see, is a bit of a crooked type (did he play any other type in the '90s) and when he finds out that his money is missing he becomes determined to get it back. Meanwhile, Preston gets spending, telling people that he is now in the employ of a Mr. Macintosh.

It's funny how $1M doesn't seem like all that much nowadays, but it's worth noting that it wasn't actually all that much back in 1994, when this movie was released. It's a nice, round figure, and it's the type of figure that a kid would aim for, but the film does remind viewers that anyone trying to spend this kind of money like water isn't going to need too much time.

Director Rupert Wainwright keeps everything moving along at a zippy pace, and he makes sure that kids will enjoy watching the main character live his dream, but the script, by Blake Snyder and Colby Carr, never does as well as it should. The humour isn't as sharp as it could be, the tension fails to rise, even when Ferrer starts to get closer and closer to his target, there's a very clumsy story strand involving Preston and a woman (Karen Duffy) that he takes a shine to.

The young lead isn't the best to appear in a Disney film, but he may well be served short by the script so I'm not going to be overly critical. Thankfully, the adults fare slightly better. As well as Ferrer, who can do menacing in his sleep, there are enjoyable turns from Tone Loc and Michael Lerner, as two men helping him to retrieve his money. Duffy is an enjoyable presence, although she's dragged down by being the potential "love interest" for a minor, and Rick Ducommun is a lot of fun as the limo driver who befriends Preston while driving him around.

It still has enough to appeal to its target demographic, but this is by-the-numbers stuff that doesn't leave any major lasting impression. Montage moment? Check. Light and upbeat soundtrack? Check. Moral lesson learned? Check. Adults pratfalling as a kid outwits them? Check. Decidedly average and . . . . . blank? Check. 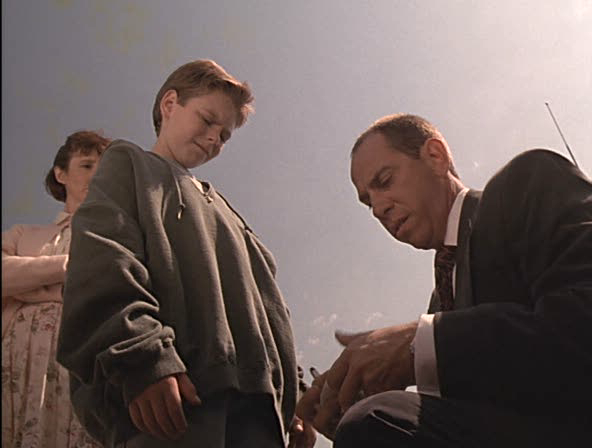 I don't get paid for blogging, and some may think that's obvious/a good thing, but every copy of my book sold gets a few pounds in my pocket, and gets you a good read (if I say so myself). So please feel free to remember me whenever you're visiting Amazon.