Written and directed by Matthew Bright, Freeway is a deliriously demented riff on Little Red Riding Hood. It's sleazy, often ridiculous, and a hell of a lot of fun.

Reese Witherspoon stars as Vanessa Lutz, a young woman travelling to stay with her grandmother after her mother and stepfather are once more carted off to jail. Vanessa accepts a lift from a pleasant man named Bob (Kiefer Sutherland), but it's not long until friction develops, and Vanessa finds herself in a whole lot of trouble.

As entertaining as it is crude and obvious, Freeway is often tasteless, occasionally tense, and darkly comedic throughout. It's also polished enough to make it all more palatable, considering just how potentially dark a number of moments are. You may forget how many boxes are checked off by the time the end credits roll, but Bright includes drug addiction, prostitution, child molestation, and much more on this winding journey to grandma's house.

Witherspoon is on top form in the lead role, alternating between unbelievable naivete and tough sassiness, depending on the situation. It's a performance on a par with her turn as Tracy Flick. Sutherland is equally enjoyable, initially charming and kind before revealing a more predatory nature within. Dan Hedaya and Wolfgang Bodison are both fun as a pair of cops trying to find a serial killer, Brooke Shields does a great job as a protective wife, and Brittany Murphy adds another slightly kooky role to her long list of slightly kooky roles. In fact, with Amanda Plummer also here in a small role, the movie could easily overbalance into twitchy lunatic mode, but it doesn't.
Bright is smart enough to tie everything in to the fairytale that he's working from without overdoing everything. Most of them are hard to miss - the red jacket worn by Vanessa, the surname of a character clueing you in to their role in the story - but others are . . . . . . . okay, also hard to miss, but that doesn't matter. Overlaying the original tale with a layer of trashy fun allows it to feel enjoyably unique, even as it hits a lot of obvious beats.

Freeway isn't a film to recommend to everyone, but I recommend it to everyone anyway. If you dig it then you will REALLY dig it. If you don't then I'm sure it won't be the worst that you've sat through. 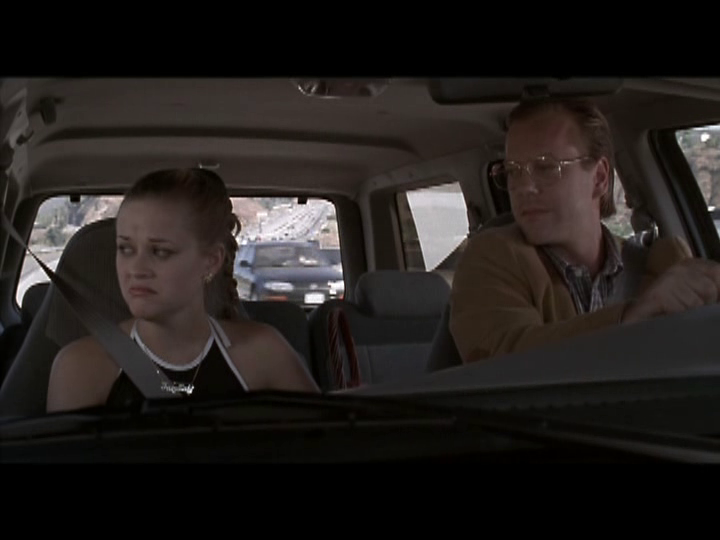