If you haven't seen any of Drew Daywalt's short horror movies, under the FEWDIO banner, then head to YouTube now and check them out. Bedfellows remains my favourite (Creep and Mockingbird are also brilliant), but so many of them are perfect little gems that you really can just go through them all. Drew is clearly a very talented man. And when he's not making horror movies he's creating astoundingly successful children's books. Well, one so far. The Day The Crayons Quit. Which makes viewing Leprechaun's Revenge a frustrating experience. It's not all that bad for a TV movie, but fans of Mr. Daywalt know that he's capable of something much better.

The story is quite simple, and gets moving quite quickly. Karen (Courtney Halverson) is out hunting with her grandfather (William Devane) when she spies something in the woods and also gets her hand marked with a red clover. It turns out that a vicious leprechaun has sprung to life, and Karen has a limited window of time to destroy it before she is doomed. Convincing her father, the local Sheriff (Billy Zane), isn't going to be easy, but she won't be able to do it alone.

There's a bit more to it than that, with a backstory about how the main family involved are descended from people who made their fortune by, well, not being nice to a leprechaun, but that just about sums it up. It's a creature feature, with a leprechaun that's far removed from the other main leprechaun known to cinema fans, but it also has some good jump scares interspersed randomly throughout as the main character succumbs to visions of what she knows is coming after her.

The direction is solid, and the script by Anthony C. Ferrante tries to do a decent job (especially when poking fun at itself), but it's not long until cracks start to appear and the movie crumbles to a state that it can't recover from. The potential for genuine scares soon dissipates, to be replaced by more standard jumps and moments of ridiculousness. Worst of all, the last few minutes feel really rushed and anti-climactic.

Halverson is fine in the main role, and Devane and Zane are both people I always enjoy watching onscreen. Zane deserves bonus points for his straight delivery during the moment in which he relates a personal tragedy that's one of the funniest I have heard in a movie of this kind. Thankfully, the comedic aspect of the material is always intentional, I think. Dave Davis is the young man who wants to help Halverson stay safe, understandably, and Azure Parsons makes a great impression with her few scenes, playing another officer of the law caught up in the madness.

It's a bit of fun, no more and no less. Worth watching if it comes on the TV and you can't be bothered to reach for the remote control, but I hope to see something much better whenever Daywalt is allowed to make a feature film completely on his own terms. 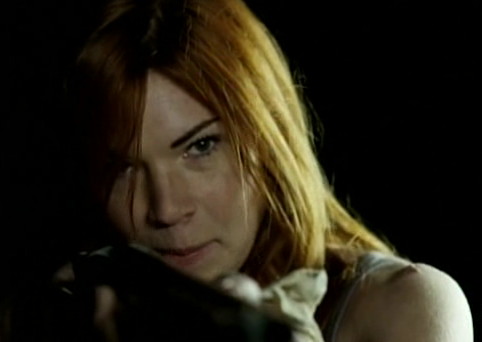