A film that remains, arguably, the high point of Roger Corman's career, The Masque Of The Red Death is a fine adaptation of material by Edgar Allan Poe. Vincent Price gives another fantastic turn in the lead role, the supporting cast all do great work, and the whole thing has a style and mix of the fantastical with the genuinely horrifying that should please most horror fans.

Europe is plagued by the "Red Death" and nobody is safe from it. Prince Prospero (Vincent Price) is a cruel man who is determined to keep himself healthy and alive, and so decides to throw a ball for invited guests at his death-free castle. He believes that his home is a refuge from the plague, although it is not a refuge that he is willing to share with everyone. Will everyone stay safe? Even young Francesca (Jane Asher), a young woman taken by Prospero from a local village for his amusement?

Dripping with gorgeous little touches in almost every scene, and chock full of great lines of dialogue (with Charles Beaumont and R. Wright Campbell being the men responsible for the script), this is a treat from start to finish for anyone allowing themselves to relax and soak up the whole experience. It's atmospheric, often quite bizarre, and all anchored by that rich Price performance.

While the leading man is the main attraction, in terms of the cast, he's not the only one doing a sterling job. Asher does well in her scenes, a sweet and innocent individual stuck in a terrible situation, and Hazel Court is mesmerising as the wicked woman, Juliana, who wants to be by Prospero's side. Patrick Magee as the selfish Alfredo (who ends up involved in the most memorable scene in the film). David Weston is the least interesting of the main characters, as Gino, but he's easy to root for as he sets out to rescue the lovely Francesca from Prospero's castle.

Although most horror fans are aware of, and praise, the Roger Corman movies that were developed from the works of Poe, it's still quite a pleasant surprise to revisit his earlier works and see just how different that output was compared to the many b-movies and creature features he has lent his name to in recent years.

It's a great shame that Corman transformed himself over the years, from a canny artist who had great business savvy into a businessman who buried any art in the quest to provide audiences with simple pleasures, but it's hard to criticise a man too much who has provided me with movies as enjoyable as this one before also, in his capacity as producer, providing me with schlock as enjoyable as Sharktopus. 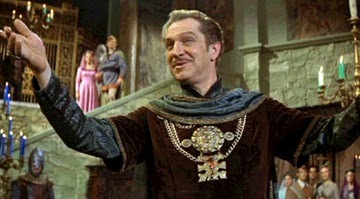