Pat Healy is Craig, a man having a very bad day. When he decides to drown his sorrows in a bar he meets up with Vince (Ethan Embry), an old friend. It's not long until the two men meet Colin (David Koechner) and Violet (Sara Paxton). Colin, as a treat for Violet on her birthday, decides to offer money in exchange for challenge accepted by Craig and/or Vince. It starts off as a bit of fun, but soon gets darker and more dangerous. Craig and Vince end up seriously competing against one another, their bonds of friendship weakening as the money on offer for each task goes up and up.

Director E. L. Katz does well here, especially considering that it's his first time in the director's chair. The movie is a small, intimate one, but also keeps reminding viewers of the wider world that's still out there, a world that Craig and Vince will have to face after humiliating themselves for cash. Whenever it seems as if the movie might need to pause and take a breath, it doesn't. Oh no, this just keeps on rolling once the nastiness gets underway.

Trent Haaga and David Chirchirillo are the writers of the script, and the two deserve no small amount of credit for giving Katz such great material to work with. Haaga, in particular, has been working in this vein for a number of years, often walking a fine line in his movies between potential horror and dark, dark comedy (and fans of the Saw franchise should check out his fantastic film, Chop).

But neither the script nor the direction would be enough to make this a great movie if the cast weren't up to the job, and thank goodness that they are. Both Healy and Embry somehow manage to stay likable throughout, even as greed starts to overshadow the better aspects of their personalities, while Koechner is a fantastic mix of benevolence and manipulation. Sara Paxton may have the least to do, out of the four main characters, but she's fine in her role, and her character is just as important to the whole dynamic, whether she's an onlooker or sometimes even a part of a challenge.

The bottom line - Cheap Thrills is a great little movie. It's not entirely dissimilar to a number of other movies that have been released over the past few years, but it does have enough going for it, thanks mainly to all of the main characterisations, to make it one of the better recent ruminations on human nature being polluted by greed. Give it a go. I bet you enjoy it. 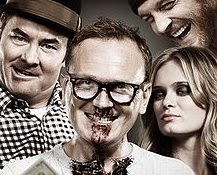