I've said it before and I'll say it again, god bless the brilliant and bonkers Ken Russell. Crimes Of Passion is his usual mix of sex, death, and blasphemy. It's a good film, but it's lifted up further by a starring role for Kathleen Turner and a brilliantly off-kilter turn from Anthony Perkins.

Turner stars as Joanna Crane, a successful businesswoman who leads a double life. At night she likes to dress up, head out, and get her kicks as a prostitute named China Blue. Many of her clients, end up smitten with her, and it's not hard to see why. She knows just what everyone wants, and will enthusiastically work to please almost any fetishist. She risks losing her anonymity and security when a man (Bobby Grady, played by John Laughlin) is hired to shadow her, all because her daytime boss suspects her of theft. Bobby finds himself joining the long queue of smitten men, but China does her best to stop people getting too attached to her. Meanwhile, an unbalanced preacher (Anthony Perkins) becomes determined to save China's soul.

Written by Barry Sandler, Crimes Of Passion is blessed with a script that's profane, witty, lovably ludicrous, and consistently entertaining. The introduction of Turner as China Blue is a scene that no viewer will ever forget, and with good reason. Everything is, quite rightly, skewed towards adoring China and showing just how good she is at her job, and also how being naughty in all the right ways doesn't necessarily make you a bad person. The numerous men who want to save China from her situation fail to realise that she doesn't need saved. She will choose when and how she wants to change her life, and when she will return to a life of being Joanna Crane full-time.

Russell directs with a fearlessness that defined most of his movies. He revels in the material, even if it's somewhat lighter fare than some of his more acclaimed pictures, and doesn't do anything by halves. Russell may be an acquired taste, to put it mildly, but I feel sorry for anyone who can't relax and enjoy the exuberance and sheer cheek present here, and in the majority of his work.

Laughlin is decent enough, I guess, in his role, and Annie Potts is as solid as ever in the role of his unhappy wife (the marriage is not in good health), but all of the best moments revolve around either Perkins, or Turner, or both. Both are brilliant, happily going up to the very edge and then, in different ways, completely over it. Perkins almost seems to be foaming at the mouth during his every moment, while Turner effortlessly mixes comedy, confidence and sexiness in a lead performance that acts as the keystone for the entire film.

It's ridiculous, but it knows exactly what it's doing. Crimes Of Passion will keep you entertained throughout, and also have you laughing out loud at times, but you'll be laughing WITH the film, which may be the highest compliment I can give. Because, in lesser hands, it would have been so easy to laugh AT it. 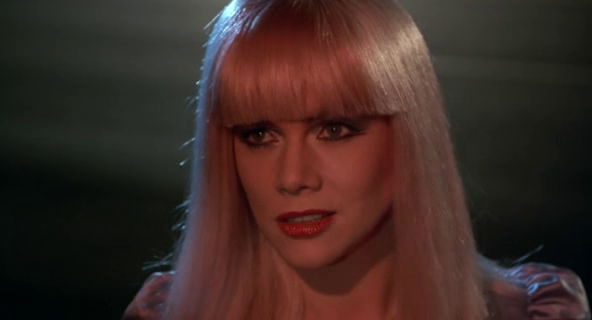