A horror comedy from the mid-1980s, The Midnight Hour has maintained a small, but loyal, fanbase, and with good reason. It's a cracking little movie, and something that would fit perfectly in any Halloween schedule. If you haven't seen it yet then do give it a go. If you have seen it then do your bit to promote it to everyone else.

The plot is quite simple. A bunch of teenagers decide to pretend to raise the dead one Halloween night, and end up actually raising the dead. Of course, they don't know it at the time. The town starts to be overrun by strange ghouls and evil creatures while the teens focus on enjoying a Halloween party. They can't remain oblivious to the situation forever, but will they realise what's going on before too many people are transformed into creatures of the night?

Written by William Bleich, and directed by Jack Bender, this is an atmospheric movie that makes up for a lack of any real frights with a great sense of fun, and that Halloween spirit poured over almost every main scene. It also gets away with a musical moment that's genuinely enjoyable, despite the fact that it should be eye-rollingly cheesy. Bleich may not have written the best dialogue, but he sets everything up quickly enough and allows for a lot of satisfying character moments throughout. Bender takes the material, and boosts it with great visual style, and plenty of dry ice.

The cast is a good mix of great actors and likable folk, with my particular favourites being Dedee Pfeiffer, LeVar Burton, Kurtwood Smith and Kevin McCarthy. Lee Montgomery is the nominal lead, and does okay, while Shari Belafonte and Jonna Lee stand out as two very different young women hoping to make the most of their Halloween night. And the voice of Wolfman Jack bellowing out of the radio is a huge bonus, as is the quite wonderful soundtrack (seriously, this is a soundtrack that I would buy immediately).

If you like the horror movies of Fred Dekker and Joe Dante, and I can't think of too many people who don't, then this is for you. It has a similiar vibe, both in the way it's respectful to the genre conventions while also playing around with them slightly and also in how it shows darkness seeping into an unprepared small town in America.

A perfect film to watch while sitting in the dark, perhaps accompanied by the flickering light of a jack-o-lantern. 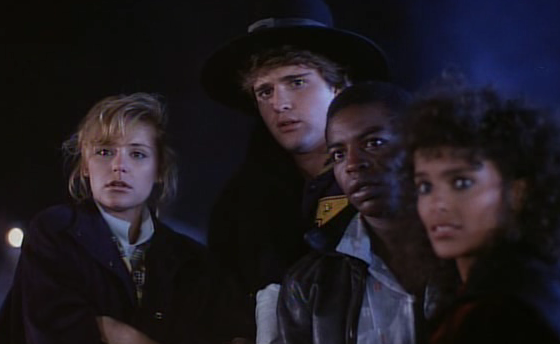