At this moment in time, I have no idea of how many movies featuring Robin Williams are still due to be released after his untimely death. All I can say is that I hope some of the others are a damn sight better than this one, which I worry will be received positively by people who simply don't want to speak ill of the dead.

And let me clarify something before I go on. Williams is pretty great in this. He's one of three main highlights. So this isn't a review aiming to have a go at him. It's just a review critical of a movie that he happened to be involved with.

Joel McHale plays Boyd Mitchler, a man who has to return to his family home, with his wife (Lauren Graham) and kids, in order to attend the christening of his nephew on December 24th. It doesn't take long until the greetings give way to animosity and resentment. The main friction comes from Boyd and his father (Williams). Boyd's younger brother, Nelson (Clark Duke), reacts to the more volatile moments by running off to hide, while his sister, Shauna (Wendi McLendon-Covey), is fairly nonplussed by the whole situation. She's busy keeping her kids from causing too much damage and telling her father off whenever he accuses her husband (Tim Heidecker) of being a pervert (for reasons that become clear as the movie plays out). To top everything off, Boyd realises that he forgot the main presents for his youngest son. This is probably the last year that he'll believe in Santa Claus and Boyd wants it to be special, unlike his own childhood Christmas experiences. Can he make the trip back to Chicago, and THEN back to Wisconsin, in time? He's certainly going to try his hardest.

Looking at the credit listings for the main talent behind the camera on this movie, it quickly becomes clear just where the problems stem from. Director Tristram Shapeero has a fine body of work to his name, but most, if not all, of it is TV work (including one of the best TV episodes ever for Brass Eye, and many episodes of Community). This would explain why the film never really feels very cinematic. It is, to all intents and purposes, either a TV movie or a couple of episodes serving as the finale/opener of some show. Unfortunately, that means that viewers are taken along for a ride with characters you have no time, or inclination, to get to know better. Oh, they could have been memorable, they could have been people that were worth watching, if the script had been better. That's where first-timer Michael Brown comes in. Seemingly content to line up the hurdles that McHale needs to overcome in order to enjoy Christmas, Brown forgets to create characters that are interesting enough to invest in. He also forgets to create a fluid narrative that leads to a deserved finale, one ripe with the potential for redemption and change. Whatever happens to these characters before the end credits roll, it just seems unearned.

I already mentioned Williams as a highlight. The other main highlights would be Duke and Oliver Platt (as a down and out Santa). Graham, Mclendon-Covey and Candice Bergen (as the mother of the household) also do solid work, but they're given a lot less to do. Heidecker's character really didn't need to be there, which leaves him with very little to do, although all of the child actors do enough to earn their places onscreen. McHale, as much as I like him on TV, can't overcome the script. His character feels more like an irritant than the lead, most of his behaviour is either stupid or simply stubborn (aka stupid), and part of me kept hoping that yet another obstacle would come along to knock him flat on his ass. That surely wasn't the intention.

I would recommend a number of Hallmark/ABC movies over this one, and I'm not joking or exaggerating when I say that. This was really poor, and a waste of some considerable talent. Skip it, unless you're a real Robin Williams completist (and I know there are a few out there). 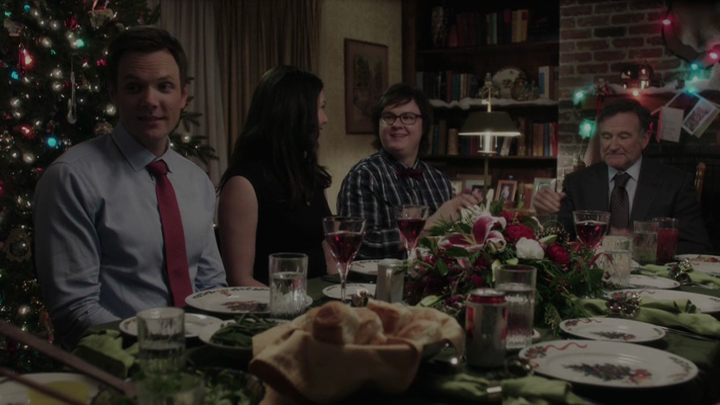