The Night They Saved Christmas (1984)

So there's an oil company drilling in a number of different Arctic site and one of those sites is situated far too close to Santa's village, meaning that the drilling has caused some problems and any blasting could cause permanent, major damage. It could mean the end of Christmas. Which is why one elf heads out, chats to one of the workers, and then takes his family on a trip to see Santa with their own eyes. If they can see what's at stake then maybe they can help to convince the oil company to relocate.

I wasn't sure what to expect when The Night They Saved Christmas began. After all, it was all about a small group of folk trying to interrupt a major American company drilling for oil. And one small, loyal figure effectively kidnaps the family of one important figure. Would this be a tinsel-covered predecessor to Syriana?

Of course not. Instead, this is a pleasant, old-fashioned, look at Santa Claus (played here by Art Carney) and the work that goes in to making Christmas happen. Jim Moloney and David Niven Jr. are the two main writers who have fun building this winter wonderland, throwing in a number of nice details and enjoyable explanations for the magic that we all know must be used to make Christmas happen. Director Jackie Cooper does okay, even willing to throw in some stop-motion effects to realise some of the sights on display. Yet he can't quite strike the right balance, meaning that the film moves from moments of wonderment to moments of tedium (pretty much any scene set in the world of the oil workers) to moments of cringe-inducing awfulness.

Paul Williams is the main elf, Ed, who makes everything happen, and he's okay in his role. Well, he's a bit irritating and patronising, but as he's playing an elf it feels unfair to put all of the blame on the actor without considering the notes he may have been given for the performance required. Jaclyn Smith is the mother who allows herself and her children to be taken away by this diminutive would-be-kidnapper, and she does fine. Carney is a decent Santa, June Lockhart makes a good Mrs. Claus, and Paul Le Mat and Mason Adams are both acceptable enough as the two main men in charge of the drilling, with the former also being the husband of Smith's character (making it more urgent for him to discover just where the hell his wife and kids have disappeared to).

To give credit where it's due, this tries to show the nuts and bolts, figuratively speaking, of just how a magical Christmas is created. With a bit more care, and less time spent in the world of the oil workers, this could have been a minor classic. It even feels like a warm-up for Santa Claus at times, which isn't a bad thing.

Sadly, it just doesn't do enough to lift it above the level of average. That doesn't mean that it's not worth a watch. I'd certainly recommend it ahead of many other movies that you'll see scheduled throughout December. I just can't see a viewing of it ever becoming a recurring yuletide tradition. 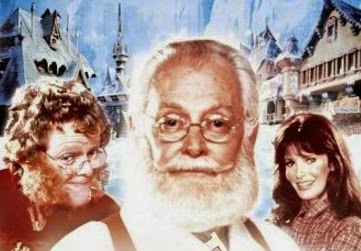