Yes. It begins. It's that most wonderful time of the year. And I thought I'd start off my festive viewings with THIS film.

In case you hadn't heard already, or figured it out from the title, Grumpy Cat's Worst Christmas Ever is the first movie to be developed from an internet meme. Which means we may be able to look forward to a second Willy Wonka movie in which he sarcastically asks to hear your opinion on subjects, there's a whole film to be made from Sad Keanu, and perhaps even a horror movie entitled I Don't Always Know What You Did Last Summer, But Even When I Don't . . . . I Do.

Anyway, the slim plot here sees a little girl (Megan Charpentier) making a Christmas wish that allows her to hear the voices of the pets in the mall pet shop that she frequents. Actually, she asked for some friends but this seems to be a strange way of making that happen. One of the pets in the shop is the famous grumpy cat, and the two girls end up working together when a pair of robbers break in to steal a dog that's worth a million dollars.

The plot, however, is incidental to the main focus of the movie, which happens to be Lifetime movies, how to sell things to consumers, and the ridulousness of its own existence. Co-written by Tim Hill and Jeff Morris, with the former also working as director, the film takes almost every opportunity to poke fun at itself, and also the viewers who have tuned in to watch such a ridiculous idea. Grumpy Cat comments on everything unfolding onscreen with the right amount of sarcasm and disdain, which makes this a whole lot funnier than it otherwise could have been.

Aubrey Plaza provides the voice of the famous cat, and it's hard to think of better casting. Famed for playing characters with eye-rolling, sullen attitude, Plaza delivers a most appropriate vocal performance. And she even gets to appear in person very, very briefly. Charpentier does a decent job, essentially playing second fiddle to the cat, and it's good that the script also makes her consider the ridiculousness of things during the earlier scenes. This isn't a small girl who simply believes that Christmas is a time for magic and miracles. She wonders what the hell is happening and then gets caught up in the midst of a dog heist. Daniel Roebuck is a security guard, and Evan Todd and Isaac Haig have fun as the incompetent robbers.

There are moments that don't work. Scenes featuring the mother of Charpentier's character, and her possible blooming relationship with a young man working as a mall elf, seem to do nothing more than take viewers away from the main entertainment, while a scene in which the young girl feels genuinely at her lowest and worst simply feels out of place, considering the tone of the majority of the movie.

Just as easy to hate as it is to enjoy, the movie tries to use that judgment to wring extra laughs from the material. And it kinda works. I'm not going to say that this is a movie I'll rush to rewatch, but it's certainly one of the better Christmas TV movies that I've seen in recent years. I laughed at a number of the lines, fans of Grumpy will be pleased to see her face featured so much, and the scene involving a fast car and some mall doors is a dopey highlight.

Yes, I'd even watch a sequel. 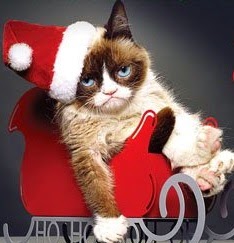 Go on, you know you should really buy my e-book, that has almost every review I've written over the past 5 years. It's very reasonably priced for the sheer amount of content.
The UK version can be bought here - http://www.amazon.co.uk/TJs-Ramshackle-Movie-Guide-Reviews-ebook/dp/B00J9PLT6Q/ref=sr_1_3?s=digital-text&ie=UTF8&qid=1395945647&sr=1-3&keywords=movie+guide

As much as I love the rest of the world, I can't keep up with all of the different links in different territories, but trust me when I say that it should be there on your local Amazon.
Posted by Tylerandjack at 10:30