Anyone who complains about the Star Wars prequels ruining their childhood, and the franchise, has obviously never seen this infamous holiday special, made with as little money and care as possible (or so it would seem). While not directly about Christmas, it IS about a major holiday and was first shown in November of 1978 in America, which certainly gives it a prime holiday spot, on the run up to both Thanksgiving and Christmas. And when I mention when it was first shown I should also mention that it has never been shown again. If George Lucas could nuke the entire planet from orbit just to ensure that this would be wiped from existence ("it's the only way to be sure") then I suspect he would.

I don't know where to begin when it comes to expressing my reaction to this. Imagine that you saw Star Wars at the age of 8. But you saw it while ill, and under the influence of too much cough medicine. And there was also a strange music video featuring Diahann Carroll spliced in. Then hit yourself over the head 50 times with an old VHS BIG box of either of the Ewoks movies. Watch some episodes of The Golden Girls. And repeat. If you can still tell fantasy from reality then perhaps use some intense hallucinogenics. You'll be close.

Everyone involved looks embarrassed, and rightfully so, and for a holiday special this certainly isn't any fun. Director Steve Binder seems to have no idea what he's doing, despite (or perhaps because of) the input from 5 different writers. The only legitimate point of interest here, aside from the warped comedy value of watching a young Harrison Ford die a little every time the camera points at him while a young Mark Hamill continues to act beautifully naive throughout the whole experience, is the first appearance, in cartoon form, of Boba Fett, bounty hunter extraordinaire.

Honestly, however bizarre you might think this will be . . . . . . . . . . . . it's a LOT worse. The fact that nobody ever considered stopping this before it was transmitted is perhaps the most damning evidence available to prove just how many drugs were still being hoovered up by folks in showbusiness at the end of the 1970s. 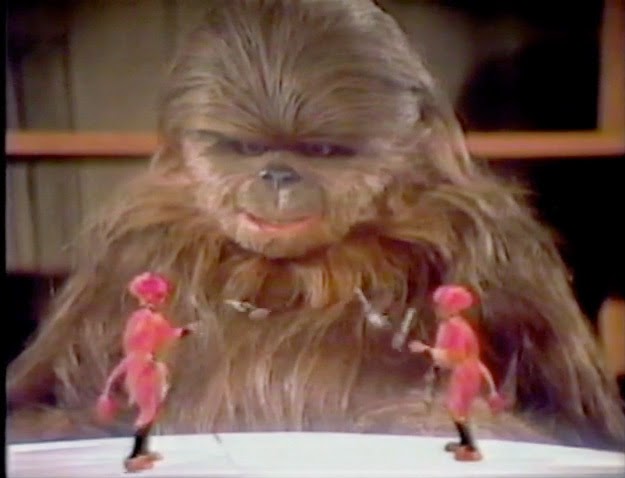